Big changes could be coming to Minnesota's liquor laws, leading breweries across the state to say "cheers."

(FOX 9) - Big changes could be coming to Minnesota's liquor laws, leading breweries across the state to say "cheers."

State lawmakers reached a major deal on Thursday that would allow big brewers to sell growlers, along with a host of other changes. Breweries both big and small would benefit if the proposal is signed into law, as well as others in the liquor industry.

Craft beer is flowing in taprooms across Minnesota, as they celebrate the biggest potential rewrite of the state's liquor laws since Sunday sales became legal in 2017.

"This is the biggest change I've seen, not just for us. This is an industry-wide change. Not just beer, but also wine, also distilled spirits," he told FOX 9.

The bill, which unanimously sailed through a legislative conference committee Thursday, would allow Surly Brewing and the state’s four other largest brewers - Summit, Schells, Castle Danger and Fulton - to sell growlers in their taprooms. Smaller breweries are already allowed to sell the 64-ounce jugs under state law. 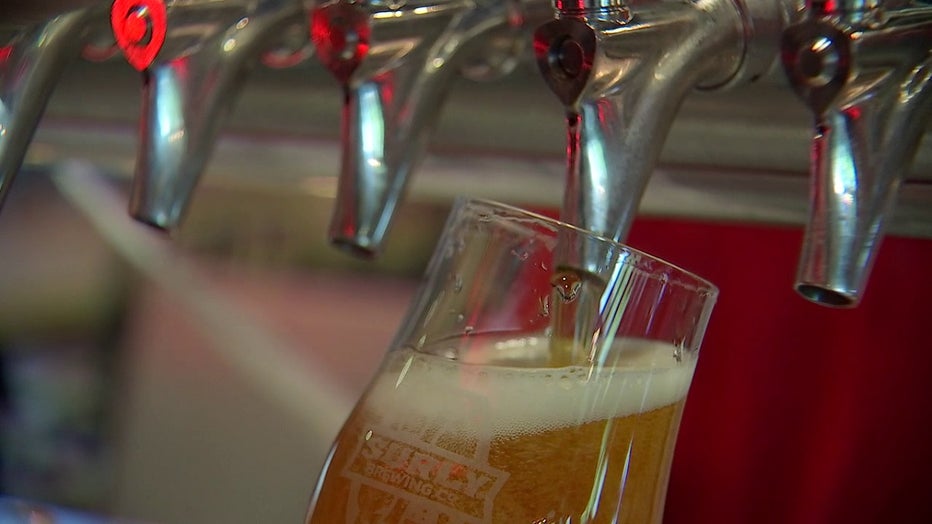 Currently, only breweries that brew less than 20,000 barrels annually can sell growlers. The proposal would up the production cap from 20,000 to 150,000 barrels.

"At Surly we haven't sold the growler to any one since the end of 2008 and it's what 2022 now?" Ansari said. "[With this bill] everyone's kind of in the same boat and we no longer hopefully have to explain to people why we can't do what everyone else does."

The bill has a host of other changes, including allowing small breweries to sell four- and six-packs to go and allowing distilleries to sell larger 750 milliliter bottles from their cocktail rooms.

Town bars would be able to stay open for extended hours during World Cup games under the bill, and Town Team Baseball organizations could become licensed to sell stronger beer.

"We would have beer that people would recognize if that would have been the case," Chris Goodman, a board member of the Chaska Cubs told FOX 9.

The Chaska Cubs have a license to sell 3.2% beer, which has a lesser alcohol content. Minnesota is the only state left with 3.2 beer laws, meaning it can be difficult for baseball organizations to get the beer because not every major company makes it.

"Miller Coors didn't make it last year and they're not making it this year. So try to get it early and beat everybody to the punch so you can stay within the law," Goodman said.

Industry leaders recognize that the beer business has changed dramatically in a few short years, and they're crossing their fingers that they'll be able to make these changes to better serve their customers.

"The industry is growing, which is great to see, and the laws have to kind of keep changing with us as we keep growing," Ansari said.

Votes in the full House and Senate are expected before the session ends on Monday.