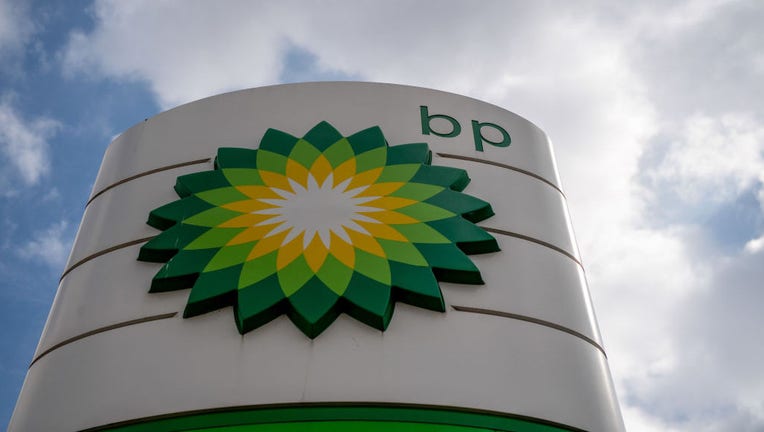 FILE - A BP logo on a totem sign at a petrol station forecourt in London, UK, on Aug. 1, 2022. Photographer: Chris J. Ratcliffe/Bloomberg via Getty Images

LONDON - BP said its earnings from April to June almost tripled from a year earlier, increasing pressure on governments to intervene as energy companies profit from high oil and natural gas prices that are fueling inflation and squeezing consumers.

Net income jumped to $9.26 billion in the second quarter from $3.12 billion in the same period a year ago, London-based BP said Tuesday. It said it expects oil and gas prices to remain high due to disruptions in supply caused by Russia’s invasion of Ukraine.

Nick Butler, a visiting professor at Kings College London and a former BP vice president, said the figures are likely to make BP and other oil companies uncomfortable given the pain high energy prices are causing for consumers.

"I think BP’s very sensitive to the reputational problems of making money at this level," Butler told the BBC. "I think there’s a real case here, which I think people in the companies would be very open to, for the government calling together the industry to find a plan to get us through the winter without putting these very high prices onto ordinary consumers."

President Joe Biden is ordering the release of 1 million barrels of oil per day from the nation’s strategic petroleum reserve for six months, the White House said Thursday, in a bid to control energy prices that have spiked as the U.S. and allies imposed steep sanctions on Russia over its invasion of Ukraine. Biden was to formally announce the release in remarks on his administration’s plans to combat rising gas prices.

British regulators have increased the annual energy price cap for household gas and electricity bills by 73%, to 1,971 pounds ($2,408), since Oct. 1. Cornwall Insights, an energy and utility consultant, on Tuesday estimated that the cap would jump a further 70%, to 3,359 pounds, this fall as regulators try to keep pace with wholesale gas prices.

In the United Kingdom, where inflation reached a 40-year high of 9.4% in June, the government has announced a 25% windfall profits tax on the earnings of oil and gas companies that come from British operations.

BP said Tuesday that the windfall profits tax would increase the headline tax rate on its North Sea operations to 65% from 40%. The company said it plans to set aside $800 million to cover the bump.

The opposition Labour Party said the government should do more to help consumers.

Anti-oil protesters glue themselves to Last Supper artwork in London

Protesters spray-painted the words "No New Oil" on an exhibition wall at the Royal Academy in London on July 5, 2022, before gluing themselves to a copy of Leonardo Da Vinci’s The Last Supper on display there. Credit: Just Stop Oil via Storyful

"People are worried sick about energy prices rising again in the autumn, but yet again we see eye-watering profits for oil and gas producers," Rachel Reeves, the party’s spokeswoman on treasury issues, said in a statement. "Labour argued for months for a windfall tax on these companies to help bring bills down, but when the Tories finally U-turned they decided to hand billions of pounds back to producers in tax breaks."

Brent crude, a benchmark for international oil prices, averaged $113.83 a barrel in the second quarter, up 65% from a year earlier, according to BP. Natural gas prices more than doubled over the same period, rising as Russia's war in Ukraine worsened an energy crunch and as Moscow has reduced or cut off natural gas supplies to a dozen European Union countries.

The high prices pushed BP's underlying replacement cost earnings, an industry standard profit measure that excludes one-time items and the value of inventories, to $8.45 billion in the second quarter from $2.80 billion in the same period last year.

The soaring earnings allowed BP to return billions of dollars to shareholders, with the company boosting its dividend by 10% and announcing plans to buy back $3.5 billion in shares. BP said it expects to increase dividends by about 4% annually through 2025.

The company also said it was investing in plans to increase the production of renewable energy and reduce reliance on fossil fuels as the company seeks to cut net carbon emissions to zero by 2050. The company said it increased its pipeline of renewable energy projects by 10% in the first half of the year, primarily through an option to develop offshore wind farms off the east coast of Scotland and a global solar energy initiative.

"Our people have continued to work hard throughout the quarter helping to solve the energy trilemma — secure, affordable and lower carbon energy," Chief Executive Bernard Looney said. "We do this by providing the oil and gas the world needs today — while at the same time investing to accelerate the energy transition."

Environmental groups criticized the company for moving too slowly.

"While households are being plunged into poverty with knock-on impacts for the whole economy, fossil fuel companies are laughing all the way to the bank," said Doug Parr, chief scientist for Greenpeace UK. "The government is failing the U.K. and the climate in its hour of need."