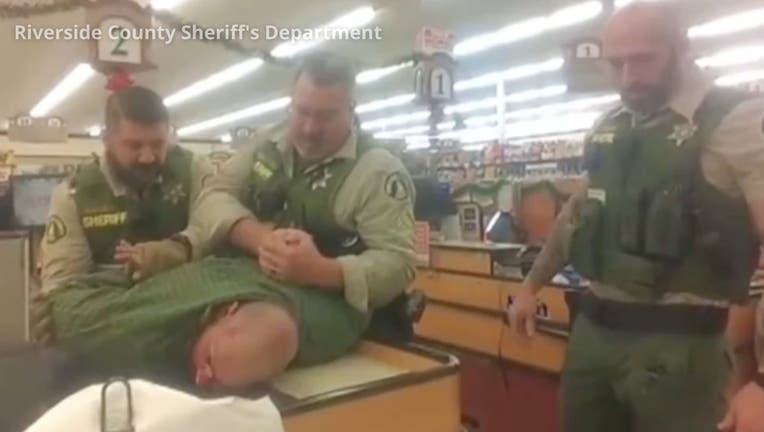 RIVERSIDE COUNTY, Calif. - The Riverside County Sheriff's Department released body camera videos that showed the graphic moments leading up to a Jurupa Valley man dying at the hands of deputies.

Back on Tuesday, December 15, deputies responded to a call of an assault with a deadly weapon at a grocery store in the 5500 block of Mission Boulevard in Jurupa Valley around 8:30 p.m. Prior to arriving at the scene, deputies were told the security guard at the store used pepper spray and a Taser on Serrano after the suspect reportedly tried to grab the security guard's handgun.

Deputies were also told Serrano floated in and out of the store, cut in front of people in the shopping aisles and acted irrationally.

Upon arrival, deputies say they saw 33-year-old Ernie Serrano fighting with a security guard at the store.

In the videos, deputies were seen using batons and a Taser on Serrano before trying to pin the suspect to one of the grocery store's checkout counters. Despite the use of a Taser and batons, the struggle between multiple deputies and Serrano, who was now bleeding all over his face, continued.

When deputies had Serrano in custody, Serrano could be heard shouting, "Let me go!" and "Excessive force!" Deputies later placed a spit mask on Serrano, silencing him but knocking him out of consciousness.

Riverside County Sheriff Chad Bianco said in a video press conference that the death was "determined to be acute methamphetamine intoxication with fatal arrhythmia."

The Riverside County Sheriff's Department said in a press release that while Serrano was in custody, he kept fighting with deputies and refused to follow commands.

During the autopsy, several contusions were found on his right arm and "lower extremities consistent with baton strikes," according to Sheriff Bianco.

WARNING: THE VIDEO BELOW IS VERY GRAPHIC AND IS NOT SUITABLE FOR YOUNGER VIEWERS.

The Riverside County Sheriff's Department released bodycam footage regarding the death of Ernie Serrano, who later died while in police custody.

The deadly incident remains under investigation.