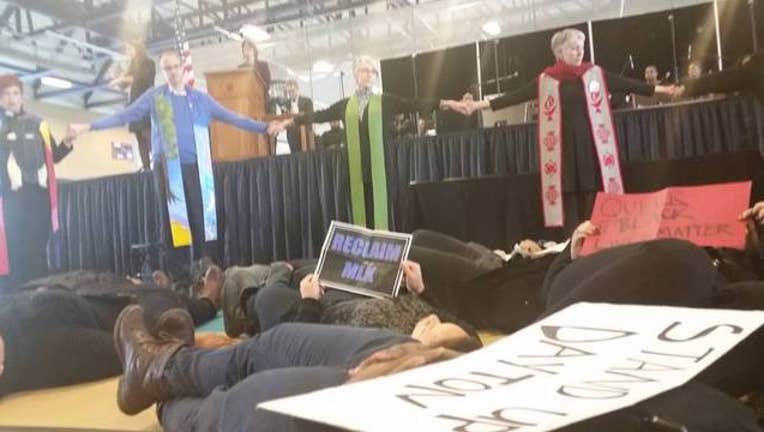 But their remarks were upstaged by Black Lives Matter protesters who staged a "die in" during the event.

The statement asks "the leadership of the state" to "take immediate action to institute meaningful, systemic policy solutions to address the worst racial disparities in the country."

"These racial disparities exist in every indicator of standards of living in our state including housing, employment, education, health, and policing," it continues.

"Every year Governor Dayton speaks on the legacy of Dr. King, yet has refused to comment on the racial inequities that continue to tear communities of color apart," the statement says. "His silence will leave a black mark on his legacy and only serves to trivialize the legacy of Dr. King."

After quoting MLK Jr., the statement "puts forth the following demands to empower and protect our communities."

Our basic demand is an immediate end to the unjust police murders of unarmed Black people. Minnesota needs to take urgent measures to eliminate our 'worst in the country' racial disparities.

3. Establish an independent community review board for police departments, with full disciplinary powers.

4. Increase the number of officers that live in the communities they serve and immediately repeal the 1990 "Stanek Residency Freedom Bill."

5. De-militarize local law enforcement in Minnesota and across the country.

6. Limit the use of deadly force by law enforcement.

7) Repeal local ordinances that criminalize petty conduct such as "lurking, loitering and spitting on sidewalks," which are used to racially profile, cite, and harass people of color.

9) Statewide adoption of body cameras. Develop policies with input from the public to address when cameras are turned on and off, data storage, and effective protocols for review of data to ensure accountability.

10. Bloomington City Attorney Sandra Johnson and the Mall of America must drop the outrageous charges and requests for restitution for "lost revenue" and "police overtime" being threatened against "organizers" of our peaceful gathering at the Mall of America.

We voice our opposition to the status quo and demands action that holds the authorities accountable to the people and communities they serve.

We will continue to push for change through non-violent action, despite the witch-hunt that has been waged upon our group and its members. Just as Dr. King and Civil Rights protesters in Selma marched amidst violent affliction, Black Lives Matter Minneapolis will not be silenced or intimidated from pursuing the justice and equity that is every person's birthright.