President-elect Biden introduced the members of his climate team Saturday.

SALT LAKE CITY - President Joe Biden said Wednesday he plans to review the Trump administration's downsizing of two sprawling national monuments in the American Southwest, including one on lands considered sacred to Native Americans who joined environmental groups in suing when the boundaries were redrawn in 2017.

The new Democratic president also plans to ask the Department of the Interior to reassess a rule change that allowed commercial fishing at a marine conservation area off the New England coast. The move was heralded by fishing groups and decried by environmentalists.

The moves are part of Biden's expansive plan to tackle climate change and reverse the Trump administration's "harmful policies," according to fact sheets issued by the administration on Biden's inauguration day. 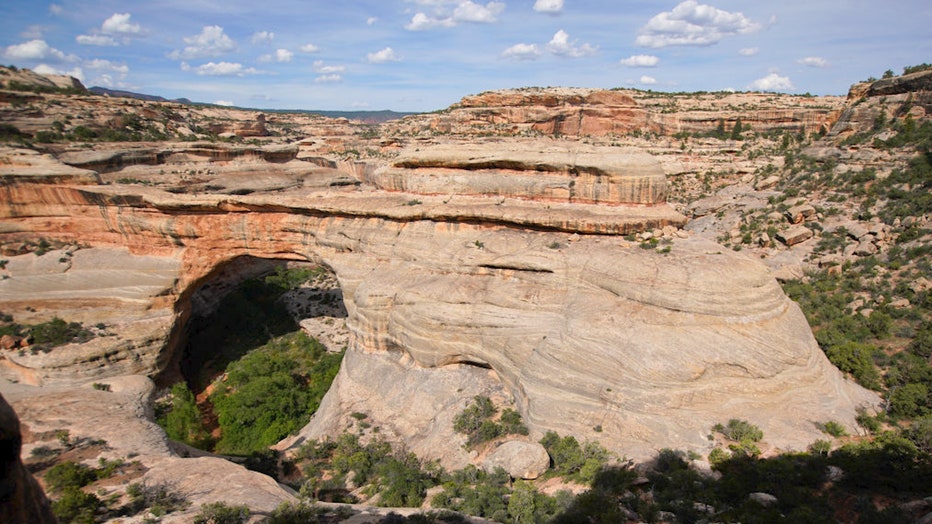 Biden vowed to also use executive orders to put a temporary moratorium on new oil and gas leasing in what had been virgin Arctic wilderness, direct federal agencies to start looking at tougher mileage standards and other emission limits again, and revoke Trump’s approval for the Keystone XL oil and gas pipeline.

The land monuments Biden will reassess are the Grand Staircase-Escalante and Bears Ears National Monuments in southern Utah. President Bill Clinton created Grand Staircase in 1996, and President Barack Obama created Bears Ears in 2016. The cuts made by Trump paved the way for potential coal mining and oil and gas drilling on lands that used to be off-limits, though activity was limited because of market dynamics.

Trump acted in December 2017 to shrink the Utah monuments on the recommendations of then-Interior Secretary Ryan Zinke, who was tasked with reviewing 27 national monuments around the country.

The monument review was based on arguments from Trump and others that a law signed by President Theodore Roosevelt allowing presidents to declare monuments had been improperly used to protect wide expanses of lands instead of places with particular historical or archaeological value.

Trump’s decision to downsize Bears Ears by 85% and shrink Grand Staircase-Escalante Nby nearly half earned him applause from Utah’s Republican leaders, who considered the monuments an example of federal government overreach.

Environmental, tribal, paleontological and outdoor recreation organizations have pending lawsuits to restore the full sizes of the monuments, arguing presidents don’t have the legal authority to undo or change monuments created by predecessors.

Pat Gonzales-Rogers, executive director of the Bears Ears Inter-Tribal Coalition, said the group has told the Biden transition team the monument should first restore to the size Obama created and later to a larger size tribes originally requested.

The lands are sacred to tribes in the coalition: Hopi Tribe, Navajo Nation, Ute Mountain Ute Tribe, Pueblo of Zuni, and Ute Indian Tribe, he said. The area includes thousands of archaeological sites on red rock lands including cliff dwellings. The Bears Ears buttes that overlook a grassy valley are particularly sacred.

"The Bears Ears is a church and the place of worship for many of our tribes," Gonzales-Rogers said. "It should be viewed with the same type of gravitas and platform that you would view the Cathedral of Notre Dame."

Bruce Adams, who stood next to Trump cheering at the Utah Capitol in 2017 when he signed the declaration shrinking the monument, said Wednesday he thinks it’s a foregone conclusion Biden will restore Bears Ears to the size Obama created, if not make it larger. Adams is county commissioner in the area where the monument is located and said the impact on the county of having to clean up trash and rescue unprepared visitors outweighs any benefit from people spending money at local hotels and restaurants.

"I don't think it's fair for the federal government to come in and do a huge land grab," Adams said. "I just wish they would attach some dollars so the county can deal with the impact."

The Northeast Canyons and Seamounts conservation area comprises about 5,000 square miles east of New England. It contains vulnerable species of marine life such as right whales and fragile deep-sea corals. The monument was the first national marine monument in the Atlantic Ocean.

Trump issued an executive order in June 2020 that reopened the monument to commercial fishing. He said at the time that Obama’s move to ban fishing in the area was "deeply unfair to Maine lobstermen," although lobster fishermen from the state don’t fish in the area.

Kristan Porter, president of the Maine Lobstermen’s Association, said Wednesday that fishermen opposed Obama’s creation of the monument because of the lack of feedback from the industry.