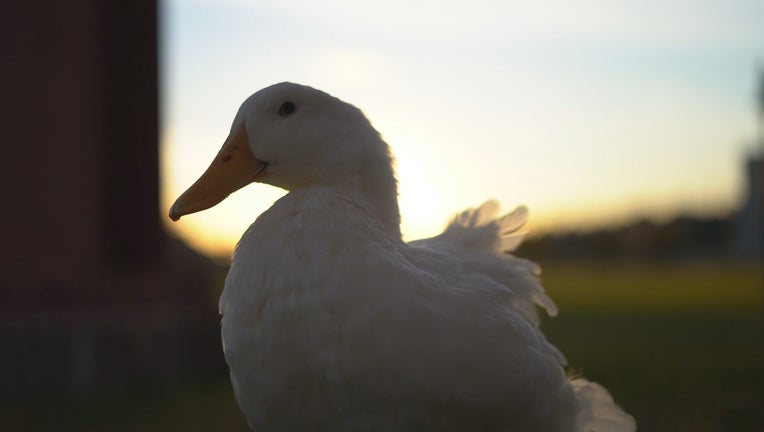 ST. PAUL, Minn. (FOX 9) - The loon may be the official bird of Minnesota, but a duck in St. Paul has a growing flock of followers.

They say that dogs are man’s best friend, but one young duck is giving any canine companion a run – or waddle – for its money.

Ben Afquack, the drumming duck in St. Paul, set the World Record for the most followers on Instagram for a duck.

Several times a week, Derek Johnson brings his pet duck - named Ben Afquack - down to Harriet Island for a walk in the park, or sometimes a swim.

“I love that he's my little adventure buddy. He gets me to go do things," Johnson said.

When they're not at the park, Ben is usually busy feathering his nest in Johnson's shed.

“Ducks are very social animals, so we try to let him inside or go on walks with us as often as we can."

And whenever they hit the road, the daring duck is right at home on the back of Johnson's hog.

“We're pretty sure he has no idea he's a duck. He thinks he's a dog. My dogs are his best friends; he likes them more than he likes me."

Johnson bought Ben from a farm store when he was just a little chick because he owned another duck as a young man but he wasn't able to keep him. Since then, the two have gone everywhere together, from Valleyfair to Target Field to the Mall of America. 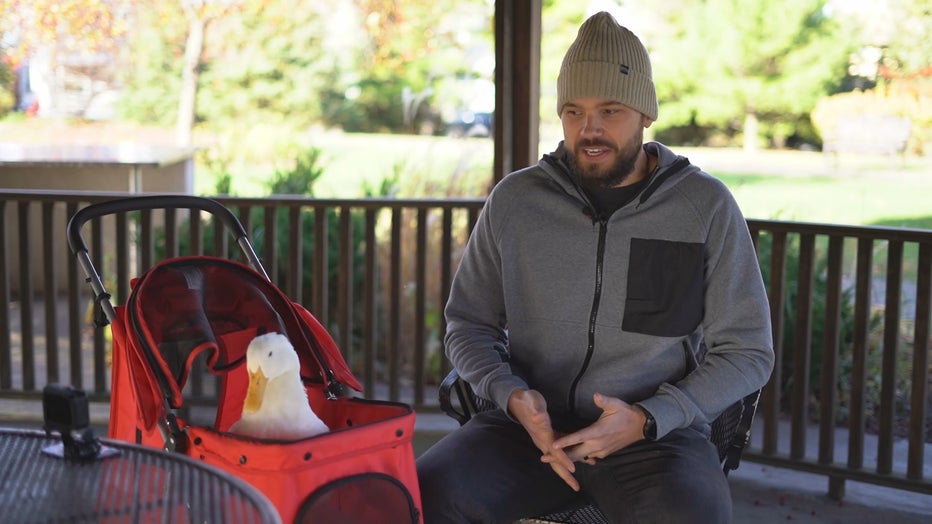 Ben Afquack and his owner Derek Johnson in St. Paul.

Johnson even started an Instagram account for Ben where he posts pictures of their adventures around Minnesota.

“It all started with us finding whatever was trending and making fun of it, and we try to stay true to that to some extent. You can only make fun of so many things. He's also a cute little duck and we try to showcase that, too," Johnson said.

Earlier this year, a video of Ben tapping his feet on a snare drum Johnson had lying around the house went viral on social media, bringing the drumming duck attention from all over the globe.

“We totally didn't expect that to happen. I thought I bet my mom would like to see that, and then it made its way around the world while I was sleeping. It was pretty insane," Johnson said.

Ben is now spreading his wings in the newest edition of the Guiness Book of World Records for having the most followers on Instagram - more than 80,000 - for a duck.

“It’s definitely a trip. What I've been saying is that it's a joke that has gotten more carried away than any joke I've ever played before. I always thought I'd have a world record. I just didn't think it would be for an Instagram famous duck," Johnson said.

Like any celebrity, Ben has been known to give people goosebumps whenever they are out for a stroll.

“He brings so much joy to people. At first, people are looking, ‘why is that wild bird following that guy around,’ then I'll sit down and he'll come to me and they'll put it together and they'll be like, ‘wait what?’”

Johnson hopes their newfound fame fits the bill for years to come.

“It’s great. I get to give the duck a fun life, and I get to have fun and give some people a good chuckle.”