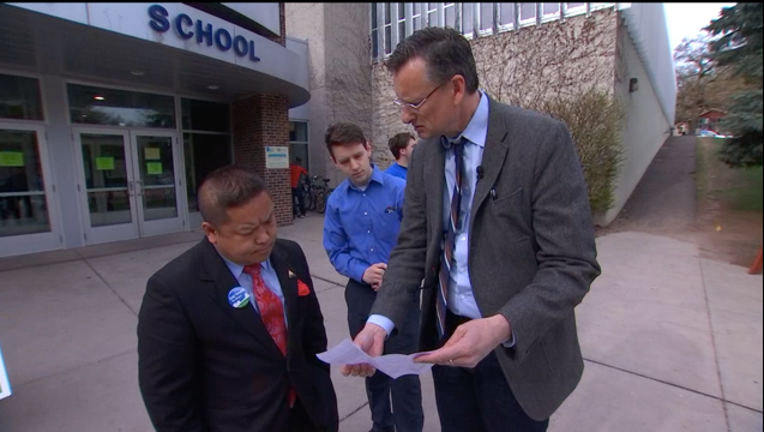 If there was any awkwardness at Wednesday's St. Paul City Council meeting, attendees didn't notice--but behind the scenes some divisions are beginning to form over bribery allegations against City Council member Dai Thao.

As a result of a Fox 9 Investigation, Thao fired his campaign manager for allegedly soliciting a bribe from a lobbyist in exchange for a vote. The incident in question is a February meeting between lobbyist Sarah Clarke and Thao, as well as a subsequent text message exchange between Thao's campaign manager, Angela Marlow, and Clarke.

READ IT: Full text exchange between lobbyist and campaign manager

The St. Paul Police Department referred the case to the Bureau of Criminal Apprehension for a criminal investigation, citing concerns over their conflict of interest.

Marlowe has been fired from her role as campaign manager because of the incident, though Thao insists that he's being set up.

"It was a set-up by a lobbyist who's married to [Minneapolis mayoral candidate] Jacob Frey, who's a supporter of [fellow St. Paul mayoral candidate] Melvin Clark and that will come up in the next few days," Thao said. "That's all I have to say for now."

Clarke, for her part, maintains that she did the right thing.

"This has nothing to do with Jacob, this has nothing to with Minneapolis or any of the other candidates. This is what Dai Thao did and that's wrong," Clarke said. "It's really challenging to be in this situation. I feel like I did the right thing and to be maligned this way is hard."

FOX 9 INTERVIEW - Lobbyist involved in campaign contribution investigation: 'I did the right thing'