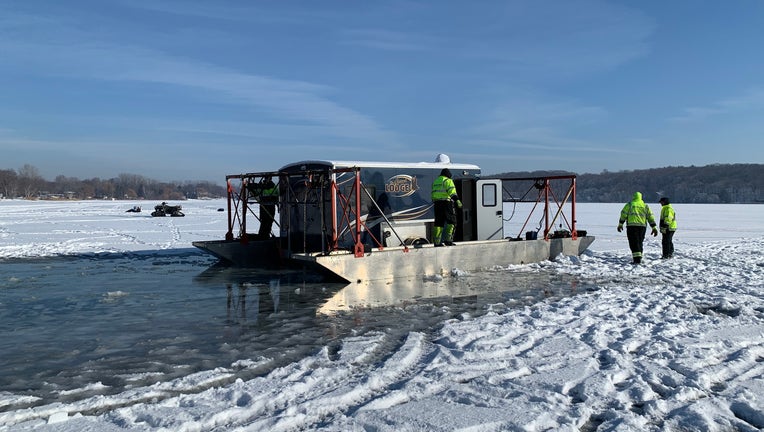 STEARNS COUNTY, Minn. (FOX 9) - The Stearns County Sheriff's Office is urging ice safety after two recent incidents where a fish house and ATV broke through the ice on lakes in the county.

On Dec. 31, two men had a close call after their ATV broke through thin ice on Pearl Lake in Maine Prairie Township. Officials learned a 65-year-old man and his 20-year-old grandson, both of St. Cloud, had been fishing and were returning back to shore when the rear end of the ATV broke through the ice. The ATV was also towing their fish house at the time. Both men were able to get out of the water safely. A towing agency later removed the partially submerged ATV.

Residents told the sheriff's office that recent snowfall had hidden the area of thin ice, which had only recently frozen over after being kept open by ducks and geese.

On January 3 around 12:07 p.m., deputies responded to a report of a fish house that went through the ice on Big Watab Lake in Collegeville Township. No one was inside at the time. When the deputies arrived, the fish house was being removed from the water. It had broken through about 30 to 40 yards away from the western shoreline. The ice was about 4 to 6 inches thick where the fish house broke though.

Officials learned a 69-year-old St. Joseph man was on his UTV pulling his 16-foot-long fish house when he felt the house fall into the snow behind him. He stopped his UTV and when he saw the fish house's wheels were submerged in the water, he disconnected his UTV. The house sank about three-quarters of the way into the water before a towing company was able to remove it.

According to the Minnesota DNR, ice is never 100 percent safe and many factors other than thickness can cause ice to be unsafe. Ice thickness guidelines also vary for new, clear ice vs. white or "snow" ice. For tips, click here.