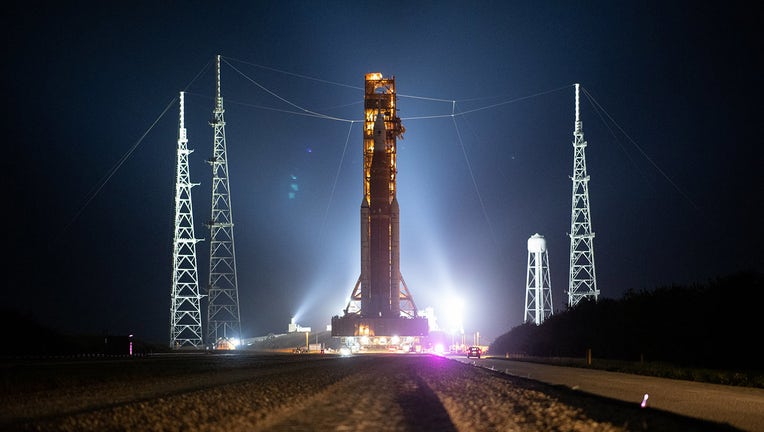 NASA’s Space Launch System (SLS) rocket with the Orion spacecraft aboard is seen atop the mobile launcher as it arrives at Launch Pad 39B, Friday, Nov. 4, 2022, at NASA’s Kennedy Space Center in Florida. (NASA/Joel Kowsky)

CAPE CANAVERAL, Fla. - NASA’s moon rocket is back on the pad for another launch attempt, following more repairs.

The 322-foot (98-meter) rocket departed its hangar in the middle of the night and completed the 4-mile (6.4-kilometer) trip shortly after sunrise Friday.

NASA is aiming for a launch attempt on Nov. 14, sending an empty crew capsule around the moon and back in a dramatic flight test before astronauts climb aboard in a couple years.

Forecasters are keeping their eyes on potential tropical weather that could interfere.

It is NASA's biggest step yet to get astronauts back on the moon by 2025. The space agency is nearing the 50th anniversary of its last human moon landing: Apollo 17 in December 1972.

Although shorter, this early version of the rocket is even more powerful than the Saturn V that sent Apollo astronauts to the moon. 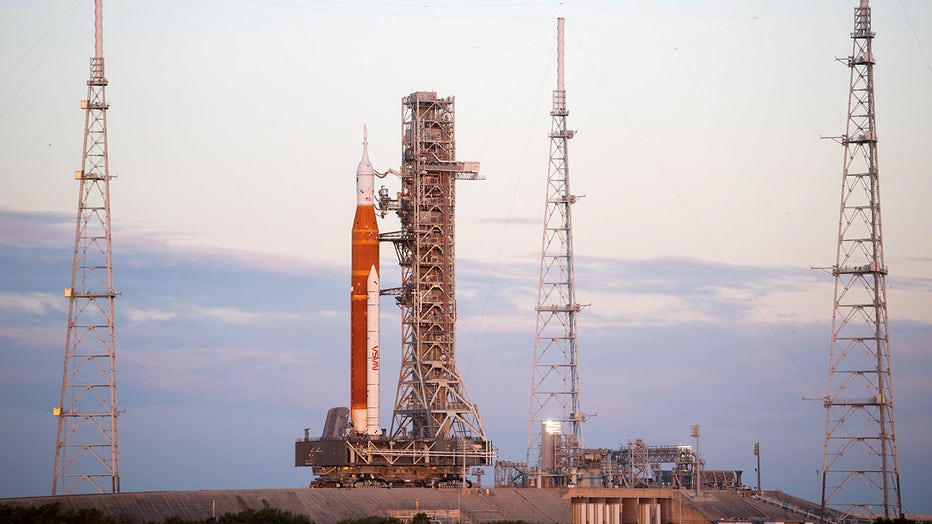 NASA’s Space Launch System (SLS) rocket with the Orion spacecraft aboard is seen atop the mobile launcher as it arrives at Launch Pad 39B, Friday, Nov. 4, 2022, at NASA’s Kennedy Space Center in Florida. (NASA/Joel Kowsky)

Fuel leaks have kept the rocket grounded since August. Then Hurricane Ian forced the rocket back to the hangar at Kennedy Space Center at the end of September. NASA used the time to make repairs and replace critical batteries.

NASA still does not know why hydrogen keeps leaking every time the rocket is fueled, but engineers are confident they can manage any future leaks, said Cliff Lanham, a senior manager.

Liftoff would be in the wee hours for the next three launch opportunities. While NASA prefers a daytime launch for test flights to capture as many pictures as possible, it's not a requirement. Radar and infrared cameras should provide ample coverage, said Jim Free, a NASA associate administrator.

The $4.1-billion mission will last close to a month, culminating with a splashdown in the Pacific. Test dummies are on board to measure radiation and vibrations.

RELATED: With Artemis I, NASA plans to plant seeds of inspiration – literally