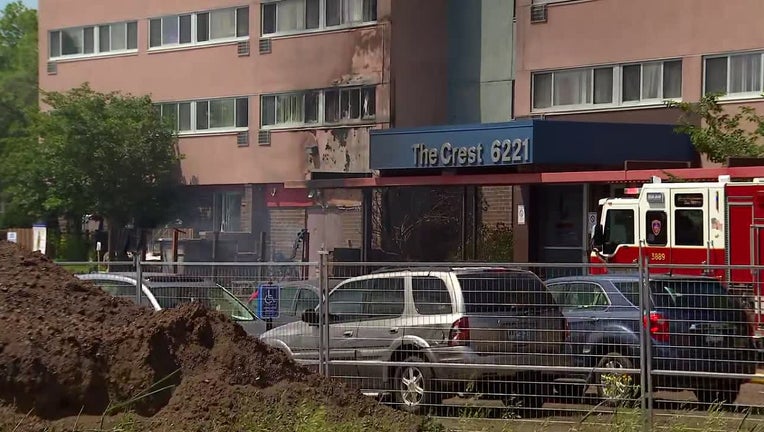 The exterior of a high-rise apartment building in Brooklyn Center after a dumpster fire quickly grew.  (FOX 9)

BROOKLYN CENTER, Minn. (FOX 9) -  A fire at a high-rise apartment building in Brooklyn Center seriously injured at least one person and hurt another Thursday, according to the fire department.

Around 1:30 p.m., the Brooklyn Center Fire responded to a call for a dumpster fire outside an apartment on the 6000 block of Shingle Creek Parkway. The small fire quickly engulfed the entire dumpster and charred part of the exterior building. Several floors and units were evacuated.

Authorities say at least two people were injured during the fire and brought to a local hospital. One person is said to be in critical condition.

Residents were temporarily relocated to the Brooklyn Center Community Center or on a bus provided by Metro Transit. The fire department said only one apartment will be displaced out of the 122 units in the building. The American Red Cross is assisting the displaced family.

The incident is still under investigation, and the total damages have not yet been determined.

The Brooklyn Park, Robbinsdale, West Metro, and Fridley Fire Departments, as well as North Memorial Ambulance, responded and assisted at the scene.