CDC director discusses study on COVID-19 vaccination completion in US

A new CDC study found that roughly 9 out of 10 people in the U.S. received their second dose of the COVID-19 vaccine within the recommended timeframe.

Laura Biggs, a 56-year-old who has already recovered from the virus, is wary of taking the vaccine. Reassurances from the Centers for Disease Control and Prevention and the Food and Drug Administration have done little to ease her alarm that the vaccine could lead to death.

"The way I feel about it is: I don’t need the vaccine at this point," she said. "And I’m not going to get the vaccine until it is well established." 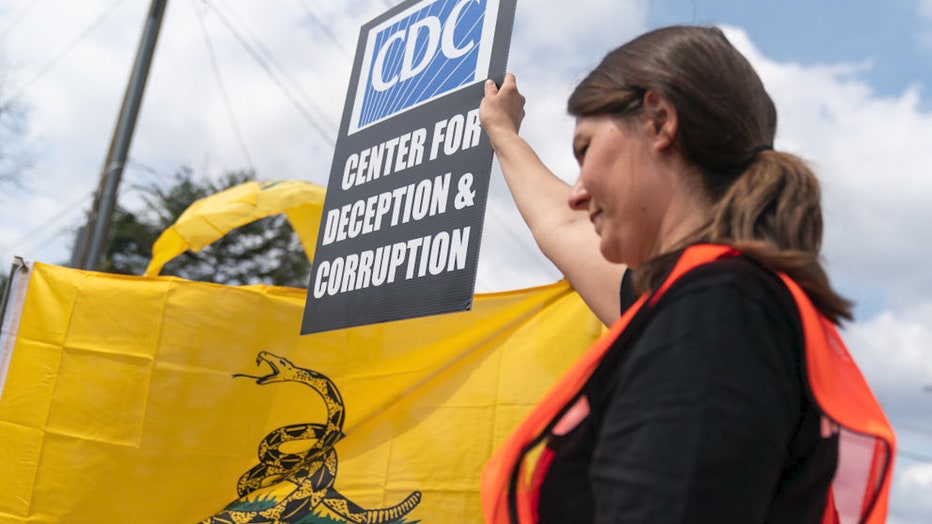 FILE - People are seen at a protest against masks, vaccines, and vaccine passports outside the headquarters of the Centers for Disease Control (CDC) on March 13, 2021 in Atlanta, Georgia.

RELATED: CDC study finds 9 out of 10 people in US got 2nd dose of COVID-19 vaccine

That sentiment demonstrates the challenge ahead for public health officials as the U.S. intensifies its efforts for widespread vaccinations that could put an end to a devastating pandemic that has left more than 530,000 dead. The campaign could falter if it becomes another litmus test in America's raging culture wars, just as mandates for mask-wearing were a point of polarization at the onset of the virus.

While polls have found vaccine hesitancy falling overall, opposition among Republicans remains stubbornly strong. A new poll from The Associated Press-NORC Center for Public Affairs Research found that 42% of Republicans say they probably or definitely will not get the shot, compared with 17% of Democrats — a 25-point split.

While demand for vaccinations still far outstrips the available supply in most parts of the country, there are already signs in some places of slowing registration. And the impact is expected to grow when supply begins to surpass demand by late April or early May, said Ashish Jha, dean of the Brown University School of Public Health.

"This is going to be the big issue," he said. "And if we get stuck at 60 or 65% vaccinated, we are going to continue to see significant outbreaks and real challenges in our country, and it’s going to be much, much harder to get back to what we think is normal unless we can get that number higher."

Ron Holloway is an example of the hurdles facing health officials. The 75-year-old Forsyth, Missouri, resident and his wife, who is 74, are at a higher risk of contracting the virus. But he was steadfast in insisting that they "don't do vaccinations."

"This whole thing is blown way out of proportion and a bunch of nonsense," he said of the virus. "We still haven’t lost 1% of our population. It is just ridiculous."

RELATED: Fauci: Trump should urge his followers to get vaccinated

Biggs is a Virginia conservative who voted for Trump. She said partisan differences were obvious among her friends and family in all aspects of the pandemic, including vaccine acceptance.

"Family members who lean left have not left home for a year," she said, while she and her husband "went everywhere. We traveled more in 2020 than I have in any year of our whole life.... I just think that there was a hysteria about it. And people put themselves in boxes, so to speak."

For Holloway, who works in real estate, the opposition runs even deeper. He is very skeptical of vaccines in general, along with government and pharmaceutical companies. He believes the virus was exaggerated to deny Trump, whom he supported, a second term.

"I just don’t believe we need vaccinations. I don’t think it is the way God intended for us to be," said Holloway. "The majority of my friends and the people that I associated with, the people that we go to church with, we don’t wear masks, we don’t get the shots. I don’t know why people are so terrified of this. It is nothing worse than a flu." COVID 19 is, in fact, far more lethal.

Republicans have been skeptical of the pandemic all along. AP-NORC polls have shown they worry less than Democrats about infection and voice more opposition to restrictions and mask-wearing. In interviews over the last several days, many wondered why they should be early adopters of vaccines with potential side effects when they weren’t worried about the virus and had already moved on.

But the resistance to vaccines has worried GOP pollster Frank Luntz, who convened a focus group on Saturday with 20 vaccine-skeptical Trump voters to try to figure out what kinds of messages might persuade them to take the shots. Participating in the session were Republican congressional leaders, including House Minority Leader Kevin McCarthy, former New Jersey Gov. Chris Christie, and former CDC director Thomas Frieden.

RELATED: Children likely to be asymptomatic, not tested for COVID-19 but still spreading disease

"The overarching message from this session is it’s going to be very, very hard," he said. "The people who voted for Trump and don’t want to take the vaccine are committed in their opposition. They don’t trust the science. They don’t believe the media and they think everything is politicized."

In order to change their minds, "you have to start with the facts and then you layer over it the emotion."

"You have to recognize and empathize with their hesitations and concerns," he said.

Some have placed blame on Trump, who spent much of the pandemic minimizing the dangers posed by the virus, even after he was hospitalized and had to be given supplemental oxygen and experimental treatments. Trump did receive the vaccine before leaving office, but did so privately and secretly, declining to disclose the fact until this month.

And though he urged Americans to be vaccinated in a recent speech, he has done nothing else to promote the efforts and is notably absent from an ad campaign that features former Presidents Barack Obama, George W. Bush, Bill Clinton and Jimmy Carter, along with their wives.

Dr. Anthony Fauci, the government’s top infectious disease expert, said Sunday that Trump using his "incredible influence" with Republicans would "make all the difference in the world" when it comes to overcoming hesitancy.

But Luntz said he thinks it's too late. In his focus group, an ad featuring the past presidents made participants less likely to want to get vaccinated. And participants said they trusted their doctors much more than the former president.

RELATED: Italy back to lockdown over Easter weekend amid surging COVID-19 cases

"My advice to politicians is step aside and let your medical professional take over," he said.

Meanwhile, Biden administration officials and others say numerous outreach efforts are underway that target Republicans, particularly those who identify as evangelical Christians. President Joe Biden has urged local doctors and ministers and priests to talk about vaccines in their communities.

"We need to think about how to reach the people that are maybe more hesitant," said Marcus Plescia, chief medical officer at the Association of State and Territorial Health Officials.

Still, others are eager for shots as soon as it's their turn.

Lenton Lucas, 51, who lives in Arlington, Virginia, works for his brother's restaurants in Front Royal and has spent much of the pandemic delivering meals to those too scared to venture out. Lukas, who is Black and a Republican, voted for Trump, but said that where he lives, there is far more concern about vaccine access than hesitancy, with people desperate to get shots, despite a long history of racism and distrust.

And while he says he'd like to know more about the vaccines because "there’s pros and cons to everything," he's eager to take his so he can spend more time with his family and his 70-year-old mother.