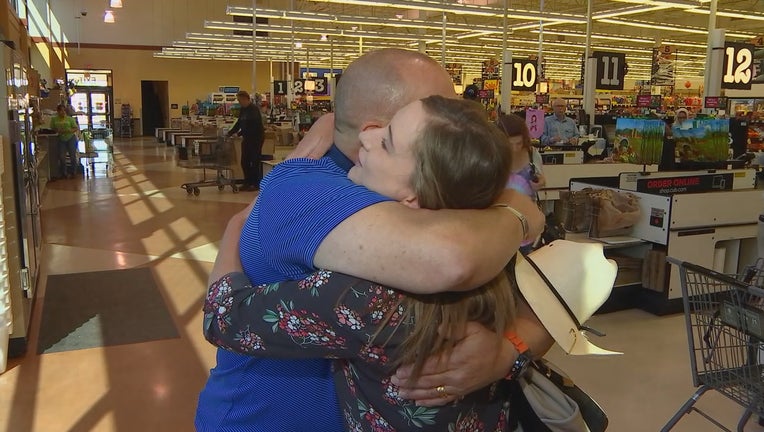 A man paid for a mother's groceries after she forgot her wallet, prompting her to start a GoFundMe for a good cause. (FOX 9 Minneapolis-St. Paul)

It was at the grocery store that Mandy Finnestad was wrapping up a hectic day last week. Mandy just returned to school herself and had two young mouths to feed. She was tired and rundown and just wanted to get home when she realized she didn’t have either cash or her bank card after her items were rung up.

An act of kindness in the grocery line prompted a Minnesota mom to pay it forward and support a good cause.

Peter, who was bagging his own groceries, heard Mandy’s exchange with Lynn the cashier and quickly came to the rescue.

“I said, ‘how much is it?’ Lynn said $21 and some change…so I handed her the cash and got it all taken care of because I get it. Things happen sometimes,” Peter said.

“It didn’t even phase him,” Mandy said. “I wanted to get out of there as soon as possible because obviously the embarrassment.”

Mandy said Peter didn’t want to be paid back and cheerfully declined to provide any contact information to make sure she couldn’t pay him.

But, the aspiring creative writer had to share her feelings and say “thank you” publicly. She took to Facebook to write a touching note to the man she knew only as “Peter who worked for the Anoka-Hennepin School District.”

Her post went viral in the north metro, eventually finding Peter and a place in the district’s weekly newsletter.

In an effort to pay it forward, Mandy has launched a GoFundMe to benefit the Evergreen Park World Cultures Community School in Brooklyn Center where Peter is the building maintenance supervisor.

“I was thinking there’s so much crap out there, how nice would it be to share the story? I was not expecting it to get so big at all. I guess people like hearing about things like that,” she said.

Peter is currently on medical leave from his job because of a bad concussion he suffered during a fall this summer. He said the community response has been incredible and therapeutic.