Three weeks after the U.S. Supreme Court voted to overturn Roe versus Wade, thousands of people rallied at the Minnesota State Capitol in support of abortion rights.

"Abortion is healthcare, abortion is a right," Flanagan told the crowd. "And we will not go off quietly into the night."

Even under the intense heat of the sun, this year the group was especially hot, outraged by the recent ruling of the Supreme Court to overturn Roe v. Wade including Emma Doell.

"When I found out about it I cried as I’m sure a lot of other people in Minnesota did as well," said Emma Doell. 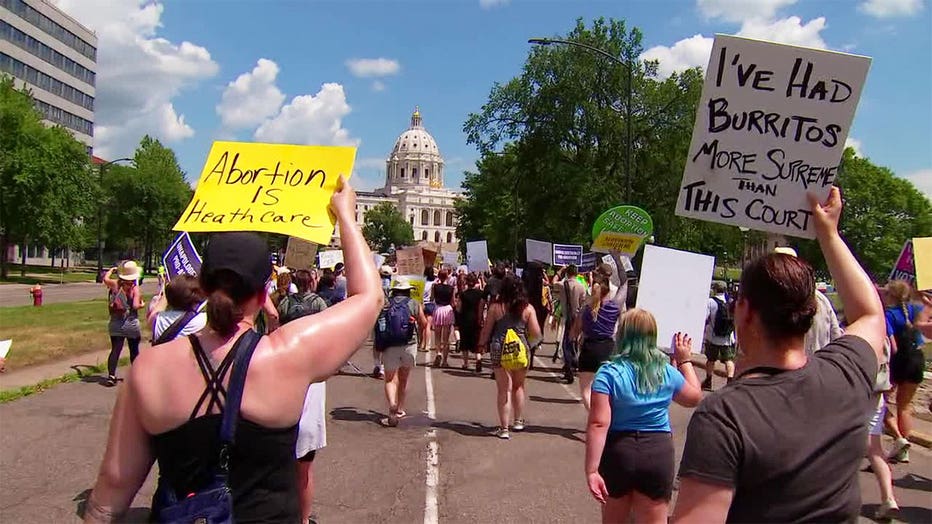 She and others feel in just a few months, November’s election could shape the direction of Minnesota for a generation to come.

"If you do not realize how dangerous this movement is, this is the moment that could change so many things for us," said Rep. Omar.

Omar told the crowd they were lucky to have abortion in Minnesota, as it's future is now in question in all of our surrounding states. That is a prospect that has Brittany Westfall worried.

"I could die from pregnancy, I need that healthcare," said Westfall. "Abortion is more than getting rid of an unwanted pregnancy. It’s a medical procedure women across the country need that."

While abortion remains legal in Minnesota, abortion rights activists were handed a victory this week as a Ramsey County judge has ruled that several of the state's abortion restrictions -- including parental notification and the 24-hour waiting period -- violate the state constitution and ordered them not to be enforced.

District Court Judge Thomas Gilligan's decision loosens Minnesota's abortion regulations at a time when many states are getting more restrictive in the wake of last month's U.S. Supreme Court ruling that overturned Roe vs. Wade, the 1972 decision that federally protected abortion access for a half-century.

Gilligan tossed out several Minnesota laws, including the requirement that an abortion provider inform both parents of a minor child who seeks an abortion, provide patients regardless of age with certain information prior to performing an abortion, and delay an abortion for at least 24 hours after providing that information to the patient.