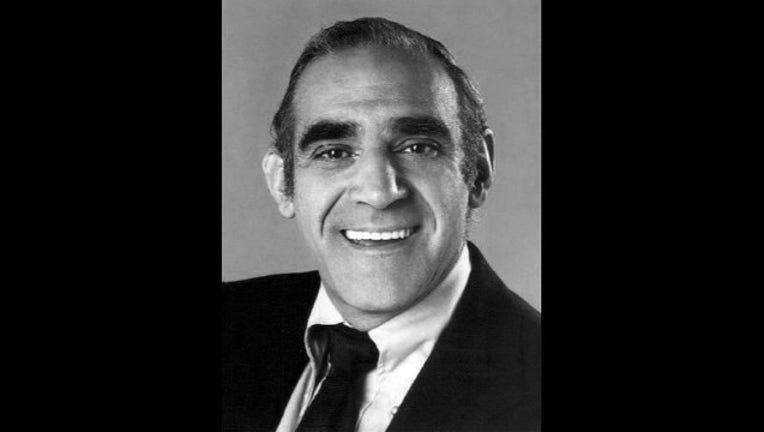 NEW YORK (AP) — Character actor Abe Vigoda, whose leathery, sunken-eyed face made him ideal for playing the over-the-hill detective Phil Fish in the 1970s TV series "Barney Miller" and the doomed Mafia soldier in "The Godfather," died Tuesday at age 94.

Vigoda's daughter, Carol Vigoda Fuchs, told The Associated Press that Vigoda died Tuesday morning in his sleep at Fuchs' home in Woodland Park, New Jersey. The cause of death was old age. "This man was never sick," Fuchs said.

His death brought to an end years of questions on whether he was still alive — sparked by a false report of his death more than three decades ago. Though Vigoda took it in stride, the question of whether he was dead or alive became something of a running joke: There was even a website devoted to answering the much-Googled question, "Is Abe Vigoda dead?" (On Tuesday, it had been updated with "Yes," with the date of his death.)

Vigoda worked in relative obscurity as a supporting actor in the New York theater and in television until Francis Ford Coppola cast him in the 1972 Oscar-winning "The Godfather."

Vigoda played Sal Tessio, an old friend of Vito Corleone's (Marlon Brando) who hopes to take over the family after Vito's death by killing his son Michael Corleone (Al Pacino). But Michael anticipates that Sal's suggestion for a "peace summit" among crime families is a setup and the escorts Sal thought were taking him to the meeting turn out to be his executioners.

"Tell Mike it was only business," Sal mutters to consigliere Tom Hagen, played by Robert Duvall, as he's led away.

In a statement, Duvall said Tuesday it was "great working with Abe in 'The Godfather' and wonderful to have him among us. We had some great memories together and he will really be missed."

The great success of the film and "The Godfather Part II" made Vigoda's face and voice, if not his name, recognizable to the general public and led to numerous roles, often as hoodlums.

But it was his comic turn in "Barney Miller," which starred Hal Linden and ran from 1975 to 1982, that brought Vigoda's greatest recognition.

He liked to tell the story of how he won the role of Detective Fish. An exercise enthusiast, Vigoda had just returned from a five-mile jog when his agent called and told him to report immediately to the office of Danny Arnold, who was producing a pilot for a police station comedy.

Arnold remarked that Vigoda looked tired, and the actor explained about his jog. "You know, you look like you might have hemorrhoids," Arnold said. "What are you — a doctor or a producer?" Vigoda asked. He was cast on the spot.

"The Complete Directory to Prime Time Network and Cable TV Shows," a reference book, commented that Vigoda was the hit of "Barney Miller." ''Not only did he look incredible, he sounded and acted like every breath might be his last," it said. "Fish was always on the verge of retirement, and his worst day was when the station house toilet broke down."

Vigoda remained a regular on "Barney Miller" until 1977 when he took the character to his own series, "Fish." The storyline dealt with the detective's domestic life and his relations with five street kids that he and his wife took into their home.

The show lasted a season and a half. Vigoda continued making occasional guest appearances on "Barney Miller," quitting over billing and salary differences.

But he remained a popular character actor in films, including "Cannonball Run II," ''Look Who's Talking," ''Joe Versus the Volcano" and "North."

His resemblance to Boris Karloff led to his casting in the 1986 New York revival of "Arsenic and Old Lace," playing the role Karloff originated on the stage in the 1940s. (The murderous character in the black comedy is famously said by other characters to resemble Boris Karloff, a great joke back when the real Karloff was playing him.)

Born in New York City in 1921, Vigoda attended the Theater School of Dramatic Arts at Carnegie Hall. In the early 1950s, he appeared as straight man for the Jimmy Durante and Ed Wynn TV comedies.

For 30 years, he worked in the theater, acting in dozens of plays in such diverse characters as John of Gaunt in "Richard II" (his favorite role) and Abraham Lincoln in a short-lived Broadway comedy "Tough to Get Help."

Vigoda attributed his high percentage in winning roles to his performance in auditions. Instead of delivering the tired soliloquies that most actors performed, he wrote his own, about a circus barker. At a surprise 80th birthday party in New Jersey in 2001, he gave a spirited recital of the monologue to the delight of the 100 guests.

Reflecting on his delayed success, Vigoda once remarked: "When I was a young man, I was told success had to come in my youth. I found this to be a myth. My experiences have taught me that if you deeply believe in what you are doing, success can come at any age."

"I'm the same Abe Vigoda," he told an interviewer. "I have the same friends, but the difference now is that I can buy the things I never could afford before. I have never had a house before, so now I would like a house with a nice garden and a pool. Hollywood has been very kind to me."

He was married twice, most recently to Beatrice Schy, who died in 1992. He had his daughter with his first wife, Sonja Gohlke, who has also died. Vigoda is survived by his daughter, grandchildren Jamie, Paul and Steven, and a great-grandson.

Reruns of "Barney Miller" and repeated screenings of the two "Godfather" epics kept Vigoda in the public eye, and unlike some celebrities, he enjoyed being recognized. In 1997 he was shopping in Bloomingdale's in Manhattan when a salesman remarked: "You look like Abe Vigoda. But you can't be Abe Vigoda because he's dead."

Biographical material in this story was written by The Associated Press' late Hollywood correspondent Bob Thomas.