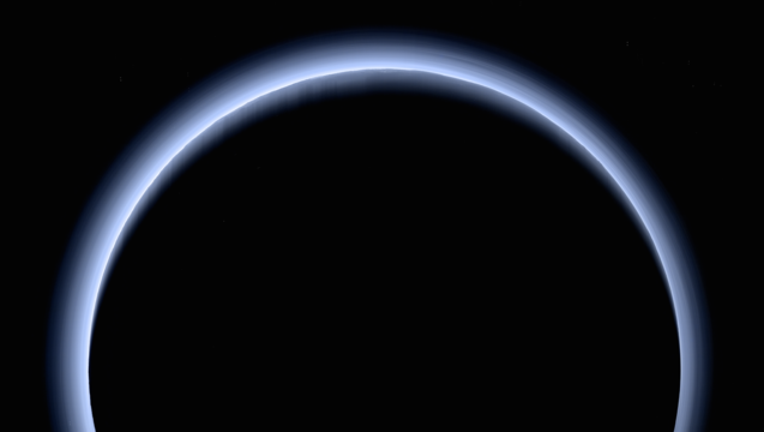 KMSP - NASA released a new image of Pluto last week that has many professional astronomers and amateur stargazers alike drooling.  It’s actually a collage of images molded together to show a true color high resolution picture of the silhouette of Pluto.  The photos were taken about 3 and a half hours after the New Horizon’s spacecraft made it’s historically close pass by the cold rocky world in July of 2015.  But the image shown is anything beyond what many imagined it would look like.  The dwarf planet has a blue halo seen on thousands of images before, but of Earth and not of Pluto.

The Earth’s halo is blue because the only color on the visible spectrum the atmosphere reflects is blue.  Obviously, that’s not true all of the time because that’s how we get red and orange sunsets… and why the aurora borealis aren’t always blue.  But for the most part, the atmosphere as a whole, the majority of the time, reflects only blue light.  Well, it appears that Pluto is the same, but likely for a very different reason.  Scientists believe that Pluto’s very thin atmosphere is mostly made up of a form of photochemical smog containing methane and several other chemicals, producing a complex mixture of acetylene and ethylene.  These hydrocarbons accumulate into small haze particles in the very thin Pluto atmosphere and apparently scatter blue sunlight.  Scientists believe that this haze, and likely the very thin atmosphere, extends about 120 miles off the surface which is roughly half the distance of Earth’s atmosphere.

As a bonus, if you look closely, you can see some mountains in the top left corner of the planet.  These mountains are sending out shadows that look like fingers through the dark landscape of the image.  We call these crepuscular rays on Earth when clouds cast these kinds of shadows on the ground.