Roads washed out in Baldwin, Wisconsin after heavy rains overnight

Roads are washed out or underwater near Baldwin, Wisconsin after heavy rains fell overnight

St. Croix County Emergency Support Services says flooding is occurring around near Baldwin, Woodville and Hammond. Several roads are washed out or covered with flowing water, including U.S. Highway 63 north of Baldwin.

Hwy. 63 is closed from U.S. Highway 12 to County Road G several miles north of Baldwin and is not passable. A portion of Hwy. 12 near Baldwin is also closed due to a wash out. Travel is not advised in the area.

Capt. Jeff Klatt of the St. Croix County Sheriff’s Office says six families had to be evacuated from their homes in the Village of Baldwin. They are currently being sheltered at the community center.

The Village of Baldwin said the Baldwin Municipal Building is open to anyone needing to evacuate their homes.

Klatt said local fire departments rescued at least five motorists from Hwy. 63 and town roads who were standing on top of their cars. The motorists had tried to drive through the water on the road and were pushed off the roads into the ditch. They had to climb onto the roofs of their cars to be rescued.

Officials are warning people not to driver into flood waters or attempt to cross moving water because you do not know if the road is washed out below you. Turn around, don’t drown.

Flooding on I-94 near Baldwin, Wisconsin

Flash flooding is reported in the area of Baldwin, Wisconsin, including along Interstate 94.

FOX 9 crews also reported flooding along Interstate 94 on the way to Baldwin.

A FOX 9 viewer reported flooding on the Rush River in Martell which is off Hwy. 63 south of Baldwin. 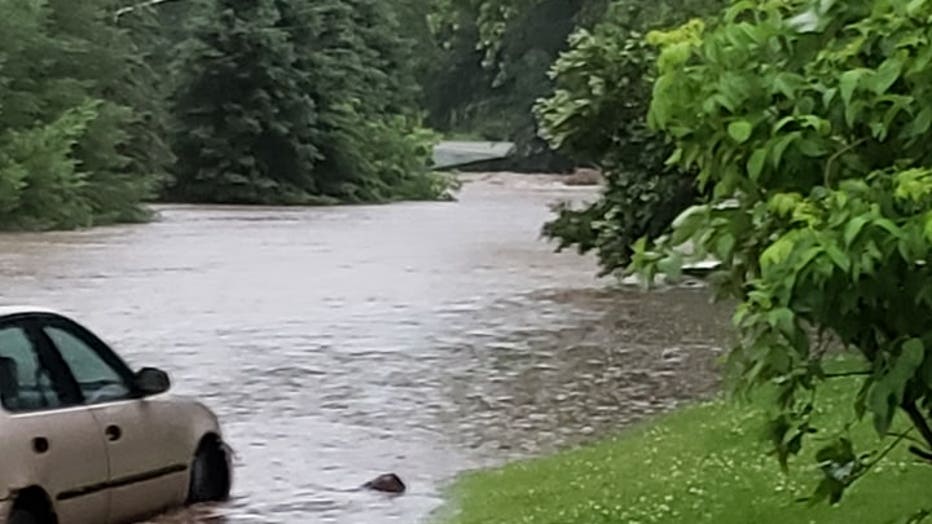