Biden on new COVID-19 rules as omicron variant reaches US

President Joe Bidden addressed the arrival of the omicron variant in the United States and what that means for safety protocols.

In Nebraska, six cases of the omicron variant were confirmed, adding to the growing number of confirmations of the new, mutant version of the coronavirus around the country.

The confirmation was announced in a news release by the Nebraska Public Health Solutions District, which covers Gage, Fillmore, Jefferson, Saline and Thayer counties, and the Nebraska Department of Health and Human Services.

The state’s first case likely stemmed from one of the six who recently traveled to Nigeria and returned on Nov. 23, the release said. That person became symptomatic the following day and sought testing. The five others who tested positive for omicron were likely exposed through household contact with the first case, officials said.

Scientists are working to determine whether omicron spreads more easily or causes more severe disease than the delta variant that now dominates in the U.S. They are also studying how well the current vaccines work against it.

Only one of the six in Nebraska was vaccinated when they became infected, officials said. None of the six had required hospitalization as of Friday. Health officials did not identify those infected with the new variant or say where they live in compliance with patient privacy requirements.

"The identification of omicron reinforces the urgency for Nebraskans to get vaccinated. The more Nebraskans are vaccinated, the less opportunity new SARS-CoV-2 variants will have to take hold in the state," Nebraska’s acting state epidemiologist, Dr. Matthew Donahue, said in a statement.

Given the realities of international travel, scientists have said it was inevitable that the omicron variant would be discovered in the U.S., and they believe it may have been spreading in the country before scientists in South Africa first reported it.

Scientists monitor variants and the coronavirus’ evolution through genetic tests that are separate from the kinds of tests used to determine whether someone has COVID-19. The Nebraska Public Health Laboratory used genetic sequencing to identify the six omicron cases. 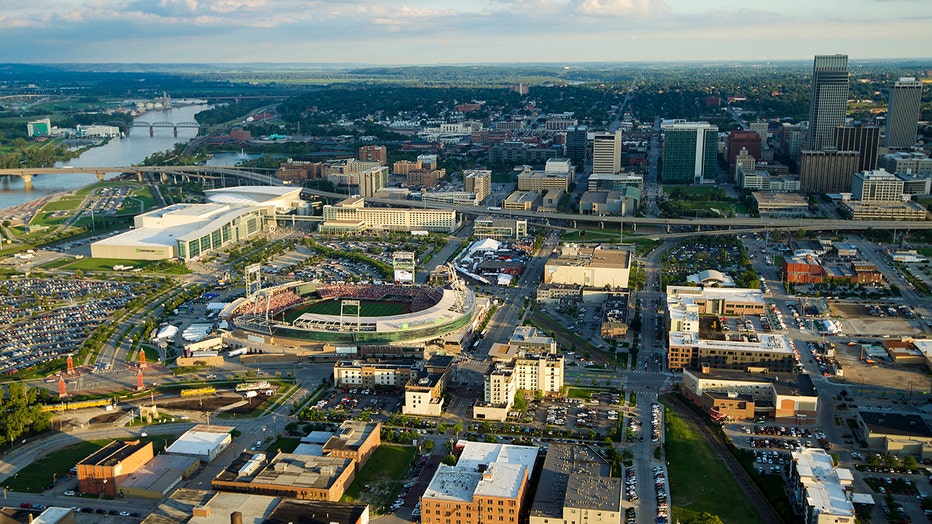 The sun sets over downtown Omaha during the Division I Men's Baseball Championship held at TD Ameritrade Park on June 26, 2018 in Omaha, Nebraska. (Photo by Jamie Schwaberow/NCAA Photos via Getty Images)

Also on Friday, the Utah Department of Health announced it detected the state’s first omicron COVID-19 case, according to a department news release.

The individual who tested positive for the new strain had recently traveled to South Africa, according to the state health department. The person was fully vaccinated and experienced mild symptoms.

"Given the high number of Utahns traveling in and out of the state, it is not surprising the Omicron variant has been found in Utah," said Dr. Leisha Nolen, state epidemiologist at the UDOH. "The discovery of this case does not change the way Utah residents should protect themselves, but reinforces that we all need to take this virus seriously. Please take action to protect yourself. Get vaccinated and get a booster dose when you qualify, wear a mask in crowded, indoor settings, get tested early if you have symptoms, and stay home if you are sick or test positive."

The omicron COVID-19 variant was discovered in at least five U.S. states by the end of Thursday, showing yet again how mutations of the virus can circumnavigate the globe with speed and ease.

Just a day after the first known U.S. case was found in California (https://apnews.com/article/coronavirus-new-variant-omicron-explainer-116ef818ac4a8e7bc23bb28d6511ecad), tests showed the omicron variant had infected at least five people in the New York City metropolitan area, plus a man from Minnesota who had attended an anime convention in Manhattan in late November.

A Colorado woman who had recently traveled to southern Africa, a Hawaii resident with no recent travel history, and another California resident who traveled to South Africa last month also were infected by the variant, officials said.

Health officials in each state said there was no cause for undue alarm. But the spread of the cases, some involving people who hadn't been away from home recently, meant the variant was likely already circulating domestically in some parts of the U.S.

Omicron is classified by the World Health Organization as a "variant of concern" as scientists work to determine how it may compare with the predominant delta variant in terms of transmissibility and severity. Scientists also are studying the degree to which existing vaccines and therapies protect against omicron.

Scientists in South Africa first reported it, but the samples came from several countries in southern Africa. And health officials in the Netherlands now say it was found there prior to the South Africa detection.

As comfort over air travel returns, it’s inevitable that new variants like omicron will spread from country to country and state to state, said professor Danielle Ompad, an epidemiologist at New York University’s School of Global Public Health.

"We shouldn’t panic, but we should be concerned," she said.

The Associated Press and Catherine Stoddard contributed to this report.