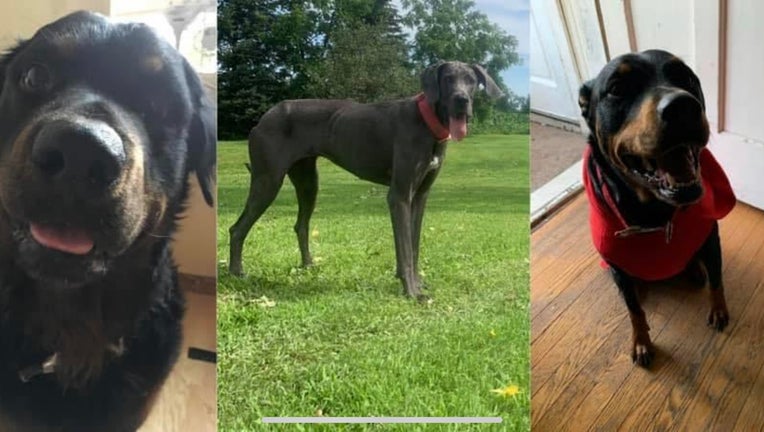 From left to right: Kingston, Sky and Charlotte. All three dogs died after a shooting in St. Paul, Minnesota Tuesday night. (FOX 9)

At about 10 p.m., officers responded to the intersection of Milton Street and Charles Avenue after a call said she heard a dog barking, several gunshots and then a dog yelp, St. Paul Police Department spokesperson Steve Linders said.

When the officers arrived, they were flagged down by a group of people in front of a house on the 900 block of Charles Avenue.

“That’s where officers found a trail of blood leading up to the house’s porch—leading them to Charlotte, a Rottweiler who was bleeding profusely,” Linders said in an email to FOX 9.

Charlotte had been shot in the head, chest and front leg.

Other officers followed another blood trail to a second Rottweiler, Kingston, in a nearby alleyway way. Kingston had been shot in the leg. The owner came to pick up the dog and took it to the veterinarian.

Both Charlotte and Kingston were put down due to their injuries, according to their owner.

Other officers found a third dog, a Great Dane puppy named Sky, collapsed near a tree in the front yard. The Great Dane did not have any gunshot wounds, but the owner told FOX 9 they suspect it died of a heart attack from the anxiety of the gunshots.

The dogs’ owner told police he had let the dogs out of the house into the fenced-in backyard, although one of the gates may have been open.

A possible witness told police the dogs may have been walking northbound in the street before the shots were fired.

No arrests have been made. The incident remains under investigation.