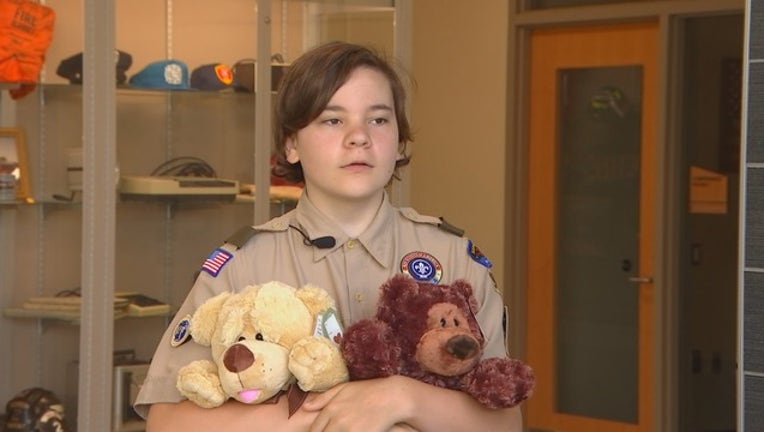 COTTAGE GROVE, Minn. (FOX 9) - 13-year-old Trey Wilhelm is working to bring smiles to the faces of young patients at St. Paul Children’s Hospital one teddy bear at a time.

He’s a Cottage Grove boy with big ambitions, too. He’s part of an Eagle Scout project where he is spending the summer collecting stuffed teddy bears that come in all colors and sizes.

“It will help brighten a day for a child in the hospital,” he said.

The 8th grader knows that from experience.

“Well, I like teddy bears and personally, I have a chronic illness and I go to a children’s hospital a lot, so I just wanted to support children who are in a similar position.

“Currently, I have about 60 and my original goal was 150 bears, but I would be ecstatic if I got more,” he said.

In search of donations, he’s hitting the pavement to spread the word online. He’s also partnering with the fire department.

“He’s a noble young man, that’s for sure,” said a firefighter. “He’s thinking of others before himself and I think that, as a boy scout, that’s what they do: they think of others before themselves.”

Each bear will come with a handwritten note attached to help young patients through the good times and bad.

For Wilhelm, the project began as a demonstration of leadership has become a labor of love.

He is collecting new teddy bears measuring between 12 and 36 inches through the end of August.

In addition to the drop off site, he’s also set up a GoFundMe Page.