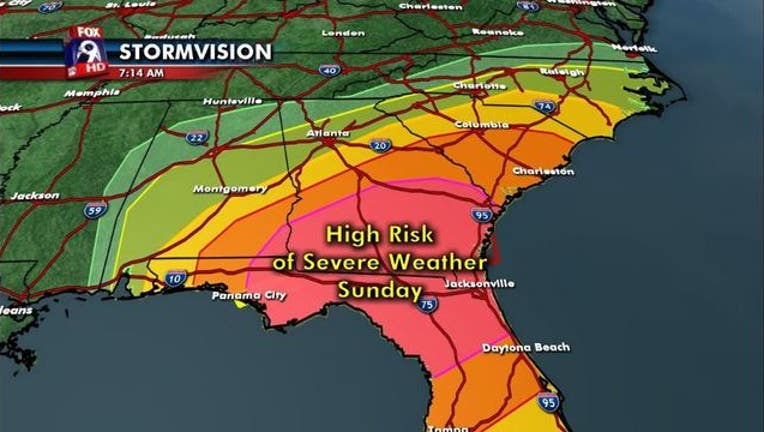 ATLANTA (AP) -- A powerful tornado ripped through a mobile home park in south Georgia early Sunday, destroying half of its structures and killing seven people. Another four people died in neighboring counties, bringing the weekend death toll from severe weather in the southeastern U.S. to 15.

No respite from the specter of tornadoes was in sight for the Georgia-Florida line, however. The National Weather Service said Sunday that southern Georgia, northern Florida and the corner of southeastern Alabama could face "intense and long track" tornadoes, scattered damaging winds and large hail.

"A severe thunderstorm and tornado outbreak is expected today across north Florida and south Georgia, with the significant  severe threat also expected to extend southward into central Florida and northeastward into South Carolina this evening," the weather service's storm prediction center.

Catherine Howden of the Georgia Emergency Management Agency said earlier Sunday that the deaths occurred in Cook, Brooks and Berrien counties in southern Georgia near the Georgia-Florida line. Another 23 people were injured.

She said the deaths were related to severe weather but could not specify whether tornadoes were the cause. Tornado warnings had been issued for parts of Georgia overnight.

Purvis estimated the park has about 40 mobile homes total and roughly half of them were destroyed.

"A tornado hit a mobile home, picked it up and put it in the middle of Highway 122," Miller said. "I don't know if it rolled or was lifted, but it blocked the entire highway."

He said the storm struck in the middle of the night, at about 4 a.m. Sunday, and both people inside the home were pronounced dead at the scene.

Officials in Berrien County could not be reached for comment.

The southeastern United States has been pounded by storms, high winds and unstable weather over the weekend. Four people died after a tornado with winds above 136 mph tore a 25-mile path across southern Mississippi before dawn Saturday.

The National Weather Service in Jacksonville, Florida, has issued a tornado warning for Echols, Clinch and Ware counties in southeastern Georgia. A severe thunderstorm warning was in effect for the Florida panhandle.