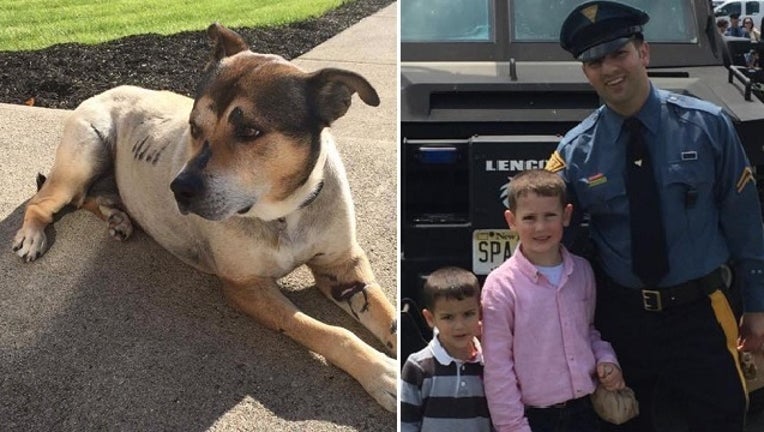 EAST ORANGE, NJ (WTXF) - New Jersey State Police shared a heartwarming story Thursday of an officer who went above and beyond the call of duty to give a dog he saved the life it deserved.

“You never know what this job will bring,” they wrote on their Facebook page as they told the story of Gozno the dog and Trooper Brian Kearns.

Back on July 17, 2007, nearly 10 years ago, Trooper Kearns and his partner rescued a stray dog that had been run over by a car, wrapped around the axle, and dragged nearly 1000 feet on the Garden State Parkway.

State Police say Trooper Kearns picked up the injured dog, and took it to a local animal hospital, where he was informed the dog’s prognosis was ‘grim.’

The veterinarian did not expect the dog to survive the ordeal, but the dog miraculously did not suffer a single broken bone, aside from some cuts, and severely damaged pads on his pads.

Trooper Kearns later returned to visit the dog, who was just leaving his crate for the first time since was hurt. During that visit, the dog sat right next to him.

After another month in the hospital, the ‘ultimate underdog’ was released from the hospital and adopted by Trooper Kearns.

Trooper Kearns named the dog Gonzo, to honor Trooper Scott Gonzalez, who was killed in the line of duty.

For the last 10-years, Gonzo has been the loving pet of the Kearns family, and loves kids!