A Sunday afternoon shooting at 38th and Chicago in Minneapolis left one man dead and another fighting for his life, police report.

UPDATE: The Hennepin County Medical Examiner has identified the man shot and killed at George Floyd Square over the weekend as 25-year-old Aaron James Rodgers of Las Vegas. He died from gunshot wounds about 30 minutes after the shooting.

MINNEAPOLIS (FOX 9) - A shooting at 38th and Chicago in Minneapolis on Sunday afternoon left one man dead and another fighting for his life, police say.

Officers responded around 1 p.m. for the shooting Sunday at George Floyd Square. At the scene, officers found two victims near the abandoned gas station at the intersection, who police say both had "life-threatening injuries". The men were rushed to the hospital where police say one of them died.

The circumstances that led up to the shooting are unclear. Minneapolis police spokesman Officer Garrett Parten says it appears some evidence at the scene was removed before officers arrived. Parten says a 911 caller reported a gun and casings at the scene after the shooting that were missing when police arrived.

"We're asking anyone who has information relating to the evidence – whether you know where that evidence is or you know who took it – please contact CrimeStoppers," said Parten. "If evidence was taken from the scene, it's important for the investigation that whoever is responsible is held to full account." 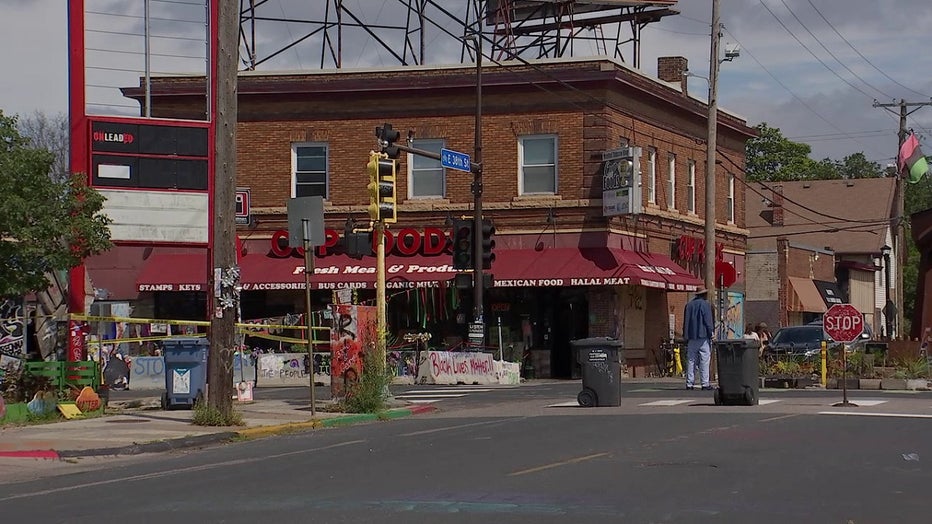 It appears the suspect involved ran from the scene on foot. The investigation into the shooting is ongoing.

This is the second deadly shooting at George Floyd Square in eight days. On Saturday, August 6, 29-year-old Mohamed Omar was found lying in the street at 38th and Chicago. A medical examiner's report found he died of multiple gunshot wounds. The investigation into that shooting is ongoing.

"Certainly [George Floyd Square] has deep meaning for a lot of people," said Officer Parten. "Especially those who are there every day trying to invest their lives to try and make that a place of peace. So, a homicide in that area certainly is of extreme concern. But we've had 58 homicides throughout the city; any community that is impacted by this kind of violence, it's certainly very concerning."

Anyone with information on Sunday's shooting can contact CrimeStoppers at 1-800-222-TIPS (8477) or online at www.CrimeStoppersMN.org.