(FOX 9) - We have had an astonishingly pleasant few days with sunshine and very mild temperatures. That is likely to continue for the rest of the workweek, before some changes and much cooler temperatures arrive for the weekend.

That doesn't mean the rest of our week won't be a little active though. Scattered storms will likely dot the landscape at times as a couple of different ripples in the atmosphere pass by. Those waves will get a good chunk of their energy as the air masses clash with a large temperature contrast developing across the region Wednesday and especially into Thursday.

While the following loop comes directly from a computer model, so the actual results will vary a bit, it gives you an idea of how large our temperature spread could be heading into Thursday.

Widespread 70s look likely on Wednesday, but boy do things turn on Thursday with afternoon temperatures cooling to the 40s and 50s across the north, and some 80s and even low 90s will be possible for southern Minnesota. The in-between zone, which includes the Twin Cities metro, has the highest chance for scattered storms to develop late Thursday and Thursday night, with some strong to severe storms possible as well.

Then we get the big cool down. It won't happen with the snap of your fingers, but most areas will cool quite a bit on Friday before much chillier temperatures arrive for all of us by the weekend.

Watch in the loop below as a cold core of air drops into the upper Midwest from southern Canada heading into the weekend before gradually warming early next week.

Many of our high temperatures will be stuck in the 50s both Saturday and Sunday, but it's really overnight lows that may cause many of us to pause. Now that the growing season is underway for a vast majority of the state, a late-season frost could be costly for our plants. But before you start sounding the alarm bells, at this point, it's far from a certainty and would more than likely be patchy in nature and relegated to the northern half of the state. But just something to think about if you've already started your spring planting or are planning to begin in the next few days.

While this potential frost seems super late in the season, it's not as late as you may think. It would be roughly three weeks behind the average for the Twin Cities if we can actually get to the freezing mark (which we'd be very hard-pressed to accomplish). For the rest of central and southern Minnesota, it would only come about a week or 10 days behind the norm. And for northern Minnesota, it'd be right on target. 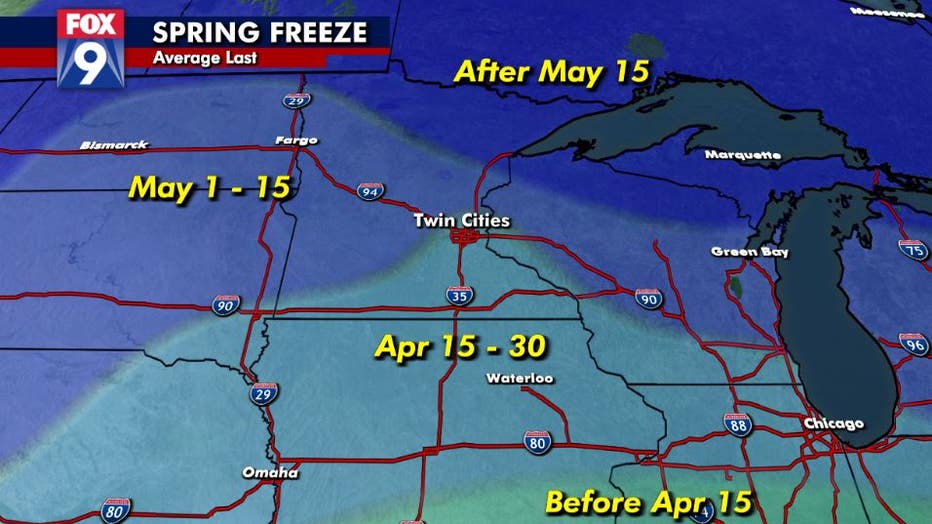 The potential free this weekend would be about three weeks behind average for the Twin Cities and right on target for northern Minnesota.  (FOX 9)