Best Buy reported a spike in online sales as residents across the country shift to virtual learning and working from home.

Minnesota-based company Best Buy is requiring all customers to wear face masks while shopping in its stores, officials announced Tuesday. 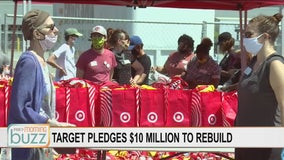 From financial support to teen tech centers, Twin Cities businesses are acting quickly to make changes after the death of George Floyd. Editor-in-chief of Twin Cities Business Allison Kaplan joined the Buzz with more on the efforts now underway.

Starting in May, Best Buy says it will allow customers to make appointments for in-store consultations in some 200 of its stores across the country.

Best Buy announced Wednesday it will furlough approximately 51,000 employees in the U.S. as its stores remain closed nationwide aside from curbside pickup during the COVID-19 pandemic.