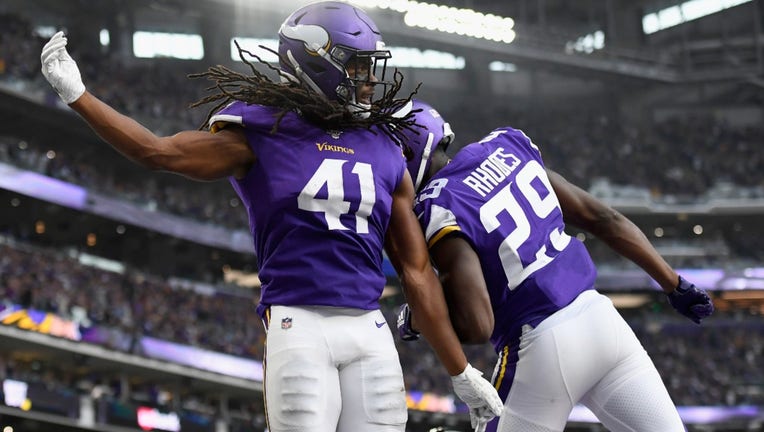 Anthony Harris #41 and Xavier Rhodes #29 of the Minnesota Vikings celebrate an interception in the end zone against the Atlanta Falcons by Harris during the third quarter of the game at U.S. Bank Stadium on September 8, 2019 in Minneapolis. (Photo by

Eagan - Mike Zimmer pointed out very quickly to his team in the locker room after the Vikings beat the Atlanta Falcons 28-12 on Sunday at U.S. Bank Stadium that it’s only one game.

It’s fun to win and it should be celebrated, but just as quickly, it’s time to wipe the slate clean and move onto Week 2. Zimmer called the day after Week 1 “Overreaction Monday” as 16 teams look to improve to 2-0 next week, while the other 16 teams at 0-1 try to find a way to avoid starting the season on a two-game losing skid.

Zimmer made it clear after the win that there’s still plenty to work on, especially as they get ready to travel to their NFC North rivals in Wisconsin next Sunday.

“I talked to them yesterday about it after the game. Everybody is going to tell you how great you are today and we have to get back to work. There’s still a lot of things we need to clean up,” Zimmer said.

Monday’s film session likely involved looking at the 12 penalties called on the Vikings Sunday, which included four for defensive neutral zone infractions. They also had a few breakdowns in the secondary in the second half, though the game was likely already decided.

The reality is the Vikings could not have gotten off to a much better start, especially on defense. Anthony Barr, who nearly signed with the New York Jets in free agency, sacked Matt Ryan on a blitz to start the game.

It was one of four sacks on the day. Anthony Harris intercepted two passes, and Trae Waynes forced a Devonta Freeman fumble. The Vikings turned those three turnovers into 21 points.

“First and foremost, our fans had that stadium jumping. It was loud, they (Atlanta) can’t communicate, that helps us every time. We were just playing what we were communicating. That’s what it looks like when everything works together,” defensive end Stephen Weatherly said.

It was a big day for Harris, who got two interceptions for the second time in his career. He picked off Mitchell Trubisky twice in Chicago last season.

He said Tuesday he's just focused on making plays to help the defense, and it could be his coming out party with Andrew Sendejo gone. In 15 games and nine starts last year, Harris had three interceptions and 46 tackles.

On his first interception Sunday, Harris was covering Austin Hooper when he saw that the tight end was blocking on the play. He drifted back and out-muscled Julio Jones, one of the best receivers in the NFL, for the football.

On the second interception, it appeared that Ryan was attempting to throw the football out of the end zone. But he didn’t put enough on the throw, and Harris made a leaping grab to end a Falcons’ scoring threat.

“Both the interceptions he made were really, really good plays,” Zimmer said.

Harris, who also had five tackles and two passes defended, said it was just one sequence of several big plays by the defense on Sunday.

Those big plays on defense put the Falcons on their heels, and made what could be a potent offense one dimensional. With a two-score lead in the first quarter, the Vikings’ defensive line went to work.

Along with Barr, Danielle Hunter, Everson Griffen and Linval Joseph all had sacks. It means they all had time to work on their sack dances and celebrate big plays with each other.

“One of the big things we started stressing this year is playing for one another. We played with each other every day, every practice, every Sunday, whenever we play, but it’s about having fun with each other at the same time,” Weatherly said. “When you start to have fun together, big plays are just bound to happen.”

If the Vikings’ defense continues to have fun like that, it’ll put opposing offenses on notice.