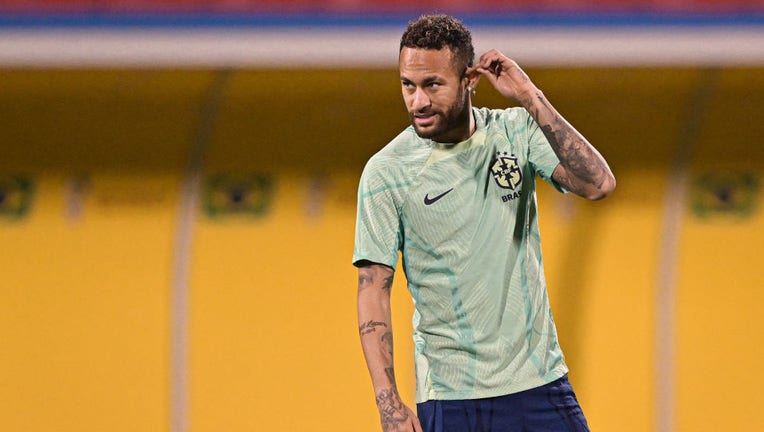 DOHA, Qatar - It was the same old Neymar out there, looking fit and scoring a goal to move closer to Pelé’s all-time record and lead Brazil into the World Cup quarterfinals.

Neymar returned from injury and converted a first-half penalty in Brazil’s 4-1 win over South Korea in the round of 16 on Monday. He reached 76 goals with the national team, one shy of the mark set by Pelé, who said he would watch the match from his hospital bed in Sao Paulo.

The 82-year-old Pelé is recovering from a respiratory infection that was aggravated by COVID-19, leaving fans in Brazil and in Qatar worried about his condition. Neymar carried a banner with the soccer great’s image and "Pelé" written on it after the match, and the entire team then posed behind it near midfield.

South Korea was trying to advance past the round of 16 for the first time since its historic run to the semifinals as a co-host in 2002.

Neymar damaged ligaments in his right ankle in the team’s opening match against Serbia and at the time there were doubts if he would play again at the World Cup. He was clearly back, and there were no signs of the injury as he led Brazil to a comfortable victory and a spot in the World Cup quarterfinals for the eighth straight time.

Brazil will next play Croatia on Friday.

Neymar scored his first goal of this year's World Cup after kissing the ball and calmly sending a low shot from the spot after waiting the goalkeeper to choose a side in the 13th minute. He danced as his teammates huddled around him, then did dance moves along with Vinícius Junior and other teammates before raising his arms to the sky and smiling broadly.

Neymar was forced out of the 2014 World Cup in Brazil after getting hurt in the quarterfinals.

Fans chanted his name as he walked off the field after the match. He had been substituted in the 81st.

Vinícius Júnior scored the first goal from inside the area after a cross by Raphinha in the seventh minute, Richarlison added to the lead from close range after a nice exchange of passes by the Brazilians in the 29th, and Lucas Paquetá scored the fourth before halftime after an assist by Vinícius Júnior.

They celebrated each goal by dancing, and even Brazil coach Tite participated in Richarlison’s traditional "pigeon" celebration.

For USA, the focus now shifts to 2026 World Cup

Croatia is going deep at another World Cup, and the team is taking the long route once again.

Goalkeeper Dominik Livakovic saved three penalty kicks Monday in Croatia's 3-1 win over Japan in a shootout, securing a return to the quarterfinals for the runner-up in the 2018 tournament.

On its run to the final four years ago, Croatia needed extra time in each round in the knockout stage — and twice came through a penalty shootout.

"We in Croatia do things this way, you could see that four years ago as well," said Livakovic, who was the back-up goalkeeper to Danijel Subasic in 2018. "I continued the tradition."

This time, Mario Pasalic converted the clinching penalty for Croatia after the teams were tied at 1-1 after extra time.

After the ball hit the net, Pasalic and the rest of Croatia's jubilant players headed right for Livakovic, who had saved penalties from Takumi Minamino, Kaoru Mitomo and Maya Yoshida.

While Croatia — a semifinalist in 1998 — prepares to take on Brazil or South Korea in the quarterfinals, Japan exits a World Cup in the round of 16 for the fourth time, just like in 2002, 2010 and 2018. The Asian team also lost in a penalty shootout to Paraguay at that stage in 2010.

Asia is still waiting for a second team to advance beyond the last 16, after South Korea on home soil in 2002.

Japan made its mark in Qatar, though, having beaten Germany and Spain — two of the last three World Cup champions — in huge upsets in the group stage.

"The players showed a new era of Japanese football, I think," Japan coach Hajime Moriyasu said. "They should use this feeling of being upset and try to go further next time.

"We cannot be superheroes in one go. We have to improve step by step. But Japan is reaching a level where we can play on the world stage."

In an even 90 minutes of regulation play, striker Daizen Maeda put Japan ahead in the 43rd minute by sweeping in a close-range finish after Yoshida had inadvertently deflected the ball across the front of goal following a cross into the area.

Ivan Perisic equalized by meeting Dejan Lovren’s cross from the right with a header into the bottom corner from near the penalty spot in the 57th.

The result guarantees at least one more World Cup game for 37-year-old Croatia captain Luka Modric, one of the best midfielders of his generation. Modric was substituted in the first half of extra time and wasn't part of the shootout.

Since 1998, all of Croatia’s knockout matches at a World Cup or European Championship have gone to extra time except for the 2018 World Cup final loss to France.