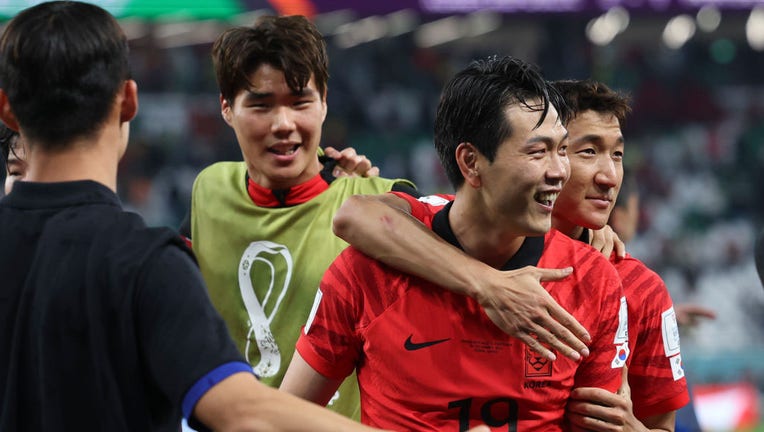 DOHA, Qatar - South Korea’s players formed a circle in the center of the field and trained their eyes on several cell phones showing a nearby match that would decide their future at the World Cup.

The South Koreans had just about done their job, beating Portugal 2-1 on a stoppage-time goal.

Now came an agonizing wait. They just needed Uruguay to not score a goal against Ghana in the other group match that still had at least six minutes to play.

Some South Korea fans prayed. Others were crying, just like captain Son Heung-min in the players’ huddle.

They could soon celebrate.

South Korea advanced to the round of 16 on the tiebreaker of goals scored, pushing Uruguay into third place Friday in one of the wildest finishes to a group in the tournament's history.

Both teams finished with four points and both had a goal difference of zero, but the Asian team scored four goals compared to Uruguay’s two.

"We never gave up," Son said through tears. "Our players were trying to run an extra step more, sacrificing themselves, and that allowed us to achieve a good result."

When the Uruguay-Ghana game finished 2-0 and South Korea was sure of its second-place finish, the players on the field erupted in joy and squirted water in the air.

Then they got in a line and sprinted toward their fans behind one of the goals at Education City Stadium before performing a dive in front of them.

South Korea was tied at 1-1 and heading out of the tournament when a Portugal corner got cleared and Son led a length-of-the-field breakaway in the first minute of added time. He got crowded out by Portugal's retreating defenders but had the presence of mind to slip a pass through an opponent's legs and into the path of Hwang Hee-chan, who converted a low finish past goalkeeper Diogo Costa.

Hwang, who came on as a substitute for his first goal at the World Cup, removed his jersey and flexed his muscles. Some of his teammates fell to the ground. But there were still five minutes more of stoppage time to play.

When the final whistle blew, Son — who was sobbing with joy — and other teammates fell dramatically to the turf, banging their fists. South Korea coach Paulo Bento, who is Portuguese, waited patiently in the tunnel while the Uruguay-Ghana match played to a finish. He couldn't be with his players because he was serving a suspension for a red card in South Korea's last game.

Hwang didn't play in South Korea's first two games because of injury but entered as a 66th-minute substitute against Portugal. He said the coaching staff told him: "You’re going to create something."

Portugal had already advanced after two games and won the group, assuring Ronaldo of at least one more match in Qatar as he seeks his first World Cup title in likely his final attempt. Ricardo Horta had given Portugal the lead in the fifth minute off a cross from Diogo Dalot.

South Korea equalized with a helping hand from Ronaldo after an outswinging corner struck his back as he turned away from the ball. Kim Young-gwon swept the loose ball into the net in the 27th minute to start a comeback that had the most dramatic of endings.

"What we achieved here is special," Son said, "and I am so proud of our players.

"Making the last 16 was our goal. We did our best every game, but you just can’t predict what happens in football." 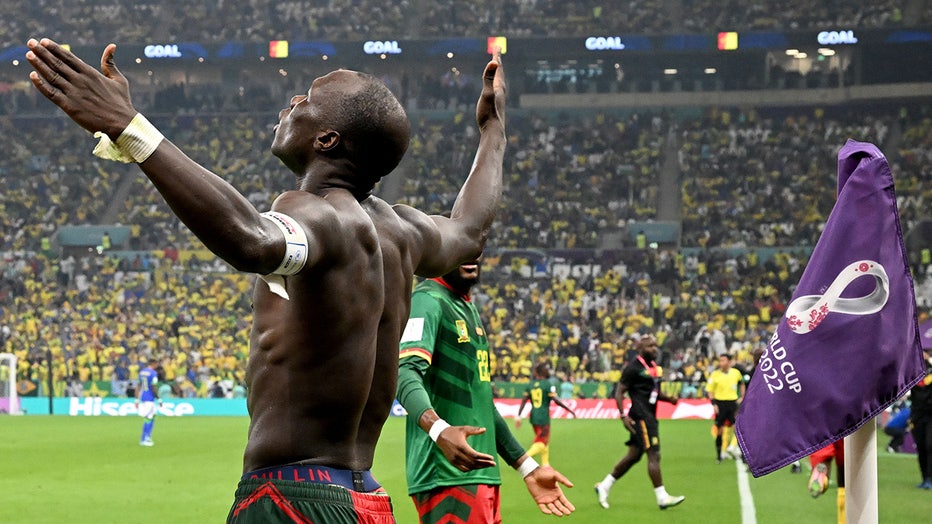 Vincent Aboubakar scored with a header two minutes into stoppage time in Cameroon's 1-0 win over Brazil at the World Cup on Friday, a result that still allowed the five-time champions to win the group and eliminated the Africans.

Aboubakar was then sent off with a second yellow card for taking off his shirt during his celebration.

Brazil, which had already reached the knockout stage after victories over Serbia and Switzerland, will face South Korea in the round of 16.

Brazil finished with six points, the same as Switzerland but the South Americans had a better goal difference. The Swiss also advanced and will face Portugal. Cameroon ended with four points and Serbia one.

Coach Tite rested nearly all of his regular starters and made 10 changes from the win against Switzerland on Monday.

Brazil was still without the injured Neymar, but the star forward was at Lusail Stadium to watch the match with his teammates. 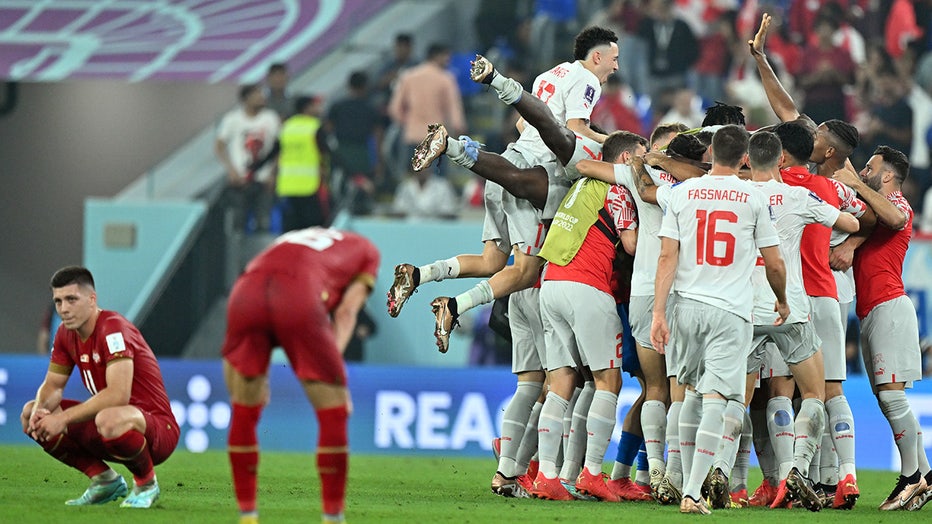 Players of Serbia react as players of Switzerland celebrate after the FIFA World Cup Qatar 2022 Group G match between Serbia and Switzerland at Stadium 974 in Doha, Qatar on December 02, 2022. (Photo by Mustafa Yalcin/Anadolu Agency via Getty Images)

Switzerland advanced to the last 16 of the World Cup for the third tournament in a row after a 3-2 win over Serbia on Friday.

Remo Freuler scored the winning goal just after halftime as the Swiss secured second place in Group G. They will next face Portugal on Tuesday at Lusail Stadium.

Xherdan Shaqiri put Switzerland ahead early in the first half before Aleksandar Mitrovic and Dusan Vlahovic responded for Serbia. Breel Embolo evened the score just before halftime.

Switzerland needed a win to guarantee itself a place in the knockout round after beating Cameroon and losing to Brazil in its opening two games. The team reached the round of 16 at the 2014 World Cup in Brazil and again four years later in Russia. They lost 1-0 in both matches, to Argentina and Sweden, respectively.

Against Portugal, the Swiss will be looking to reach the quarterfinals for the first time since hosting the competition in 1954. 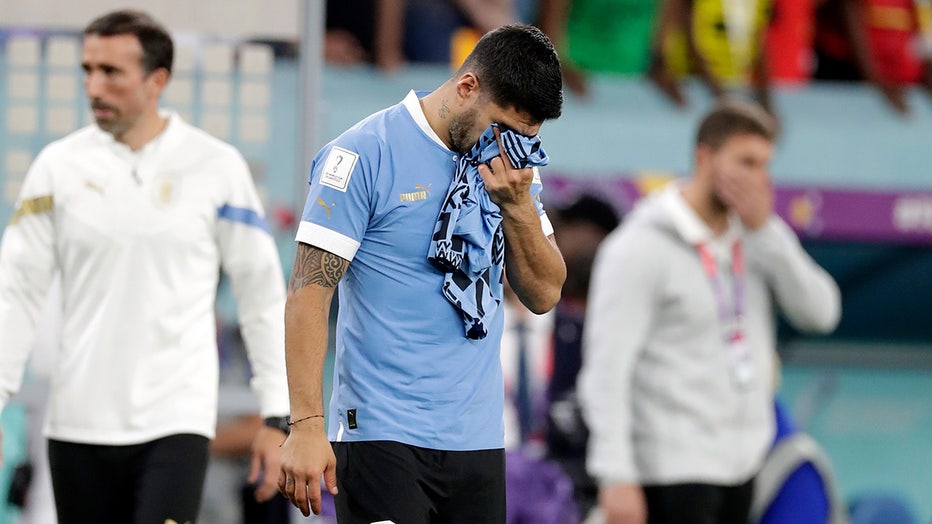 Luis Suarez of Uruguay disappointed in tears during the World Cup match between Ghana v Uruguay at the Al Janoub Stadium on December 2, 2022 in Al Wakrah Qatar (Photo by Dale MacMillan/Soccrates/Getty Images)

This time, Luis Suarez cried on the sidelines after Uruguay was eliminated from the World Cup despite a 2-0 win over Ghana on Friday.

The result also put Ghana out of the competition.

Suarez played a key role in both first-half goals scored by Giorgian De Arrascaeta and Uruguay appeared headed for the round of 16 after inflicting more pain on Ghana 12 years after their now-infamous meeting in the quarterfinals at the World Cup in South Africa.

Then, Suarez denied Ghana a winning goal with a deliberate handball on the goal-line and having been sent off, he celebrated wildly on the sidelines when Ghana missed the resultant penalty.

Uruguay was in a position to go through in Qatar until South Korea's late goal gave it a 2-1 win over Portugal in the other Group H game. That meant Uruguay needed to score one more goal in the dying minutes of its game to qualify.

It didn't and was eliminated because it had scored fewer goals than South Korea in the group stage. Suarez was distraught on the sidelines and covered his face with his shirt having been substituted in what was likely his last World Cup appearance.

Uruguay’s goals came in a six-minute spell soon after Ghana raised more memories of the 2010 quarterfinal by missing a penalty.

A Suarez shot led to De Arrascaeta’s opener and Suarez set up the second with a clever pass that De Arrascaeta volleyed in. After those two strikes, Uruguay thought it was on its way to the knockouts.

Ghana captain Andre Ayew, the team’s only survivor from the 2010 squad, had his penalty saved by Sergio Rochet in the 21st minute and the game changed immediately after that. De Arrascaeta scored in the 26th and 32nd minutes to crush Ghana hopes.

But the Uruguayans were ultimately also crushed.

Suarez had been substituted when the screen at Al Janoub Stadium suddenly flashed that South Korea was in second place in the group after a late goal against Portugal.

Uruguay surged forward in search of the goal that would have put it through. Substitutes Maximiliano Gomez and Sebastian Coates both missed late chances and Suarez was crying after the final whistle.