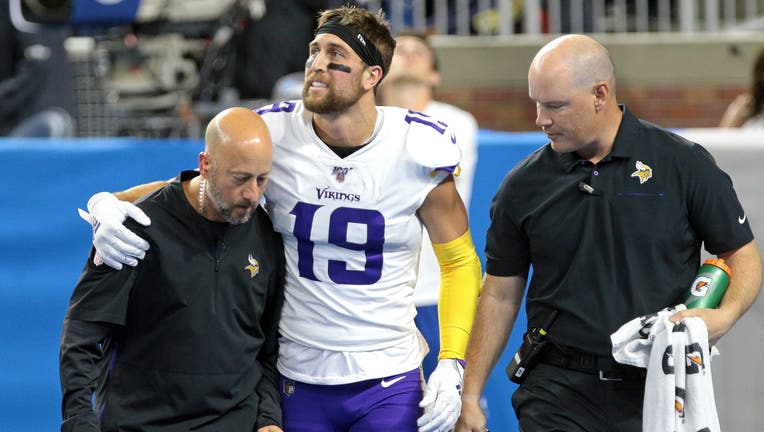 Minnesota Vikings wide receiver Adam Thielen (19) grimaces in pain after making a touchdown during the first half of an NFL football game against the Detroit Lions in Detroit, Michigan USA, on Sunday, October 20, 2019 (Photo by Jorge Lemus/NurPhoto v

EAGAN - Mike Zimmer doesn’t think it’s all that serious, but the Minnesota Vikings are preparing for life without Adam Thielen this week.

Thielen stood off to the side and watched Wednesday as the Vikings practiced at TCO Performance Center in Eagan, starting preparations for the Dallas Cowboys on Sunday Night Football. Thielen played the first offensive series in Sunday’s loss at Kansas City, and appeared to re-injure his hamstring after trying to make a third down catch on a ball thrown behind him.

He went back out for one more play against the Chiefs before telling his teammates “I’m done,” and spending the rest of the day on the sidelines. Zimmer was adamant Wednesday that Thielen did not try to come back too soon after missing the Vikings; Thursday night win against the Washingoton Redskins at U.S. Bank Stadium.

Tests taken since the original injury haven’t shown anything significant.

“The MRI does the most and what the player says does the most. Eric Sugarman does an outstanding job. It’s just one of those things that he got in the game and it grabbed a little bit. I wouldn’t say it’s a long-term deal,” Zimmer said.

Thielen’s last reception was his 25-yard touchdown in the Vikings’ Oct. 20 win at Detroit.

One of his offensive teammates, also one of the best running backs in the NFL, knows the territory. Dalvin Cook missed five games last season with a lingering hamstring injury. He’s now healthy and leading the NFL in rushing, and is 106 yards away from 1,000 for the season. He’d be the first Vikings running back since Adrian Peterson to get there in 10 games.

“Adam is a quick twitch guy, he snaps his routes and stuff like that. So that hamstring has got to be firing and it’s a tricky thing when your body can feel good and you go out there and all the sudden it comes out of nowhere,” Cook said.

Cook said the top priority for Thielen going forward is getting back to 100 percent.

With Thielen out, the Vikings’ offense has to find other ways to get the ball downfield. Before getting hurt against the Lions, Thielen had four out of six games with at least six targets.

Stefon Diggs became the quick beneficiary, with 14 catches for 285 yards in wins at Detroit and against the Redskins. But he was largely blanketed against the Chiefs with one catch for just four yards. It’s now on Kirk Cousins to distribute the ball between Diggs, Cook, Kyle Rudolph, Irv Smith Jr., Bisi Johnson and Laquon Treadwell. Even Ameer Abdullah caught a touchdown at Kansas City last week.

Thielen had six touchdowns from Cousins so far this season, and tied an NFL record last year with eight straight 100-yard games. The Thursday night game was the first Thielen had missed since he became a regular starter. Now, he may have to wait until after their Week 12 bye to return.

Cousins can’t help but feel bad for his ailing teammate.

“It’s unfortunate, unlucky, he’s been so healthy for so long. He’ll get back when he gets back and he’ll help us when he does,” Cousins said.

Thielen himself admitted last week patience is not his strength.

“It’s definitely tough. I think it’s a way that God’s tested me because I’m not very good with patience but at the same time, we have great coaches here, we have a great training staff that I’m just trusting them with the process. Doing everything I can to get back to full and get out there and help my teammates,” Thielen said.

Thielen, fullback C.J. Ham and Ifeadi Odenigbo all missed practice Wednesday. Thielen’s status will be monitored on a daily basis.