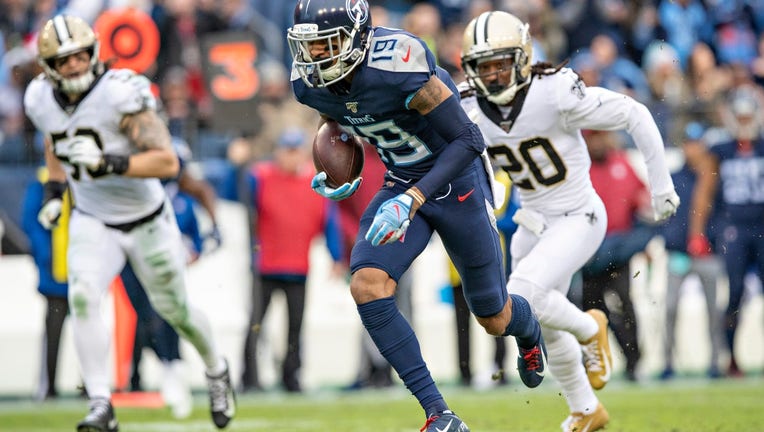 Tajae Sharpe #19 of the Tennessee Titans runs for a touchdown during a game against New Orleans Saints at Nissan Stadium on December 22, 2019 in Nashville, Tennessee. The Saints defeated the Titans 38-28. ((Photo by Wesley Hitt/Getty Images))

MINNEAPOLIS - It appears the Minnesota Vikings have gone the route of NFL free agency to find a potential replacement for Stefon Diggs.

The Vikings announced Wednesday they are signing former Tennessee Titans receiver Tajae Sharp, reportedly to a one-year contract. The Titans drafted Sharpe in 2016, and in his rookie season, he made 41 catches for 522 yards and two touchdowns. He averaged 12.7 yards per catch in 16 games, including 10 starts.

He shared a message to Vikings fans on Wednesday.

"I just want to thank everybody in the organization, all of the fans and every single one of my new teammates for welcoming me to the Vikings family with open arms," Sharpe said in a video on social media. "I’m super excited, I’m ready to get going and I’m extremely humbled by the opportunity that you have given me."

Last year, he appeared in 15 games with six starts and had 25 catches for 329 yards and a career-high four touchdowns. He averaged 13.2 yards per catch, caught more than 71 percent of the passes thrown his way and averaged a career-high 9.4 yards per target.

The Vikings are in need of another deep threat to pair with Adam Thielen after they traded Diggs to the Buffalo Bills last week for four draft picks, including the No. 22 pick in next month’s NFL Draft. The Vikings have two first-round picks, and added a fifth and sixth-round pick with trading Diggs.

The Vikings also added some defensive line help Wednesday, announcing that they'll sign Anthony Zettel for the 2020 season. He spent last year with the Cincinatti Bengals and San Francsico 49ers. He's appeared in 49 career games, including 16 starts, and played in four playoff games. He's got 7.5 career sacks, one forced fumble and one fumble recovery.

Zettel could add depth to the defensive line, which has lost Everson Griffen, Linval Joseph and Stephen Weatherly in free agency.