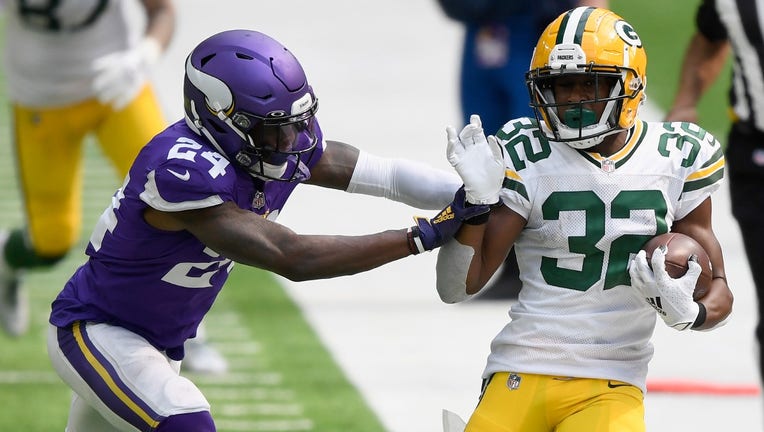 Holton Hill #24 of the Minnesota Vikings pushes Tyler Ervin #32 of the Green Bay Packers out of bounds during the fourth quarter of the game at U.S. Bank Stadium on September 13, 2020 in Minneapolis, Minnesota. The Packers defeated the Vikings 43-34. ((Photo by Hannah Foslien/Getty Images))

MINNEAPOLIS - The Minnesota Vikings aren’t panicking after opening the season with a 43-34 loss to the Green Bay Packers on Sunday at U.S. Bank Stadium.

Far from it, but there's plenty to fix and they'll have to have a sense of urgency to avoid an 0-2 start at Indianapolis this weekend. A day after losing a lopsided game to their division rival and getting dominated in time of possession, the Vikings spent Monday watching film, learning from their mistakes and turning the page like they do after every game, win or lose.

Aaron Rodgers also took advantage of a young Minnesota secondary featuring Cameron Dantzler making his NFL debut, and defensive backs still young in their careers in Holton Hill and Mike Hughes. Rodgers passed for 364 yards and four touchdowns. The 43 points the Packers scored is the most ever against a Mike Zimmer-led defense.

There were missed tackles, big throws from Rodgers, miscommunications in the secondary and three off-sides penalties on third downs. Zimmer on Monday singled out Rodgers hitting Marquez Valdes-Scantling for a 45-yard touchdown over Dantzler to give the Packers a 22-7 lead late in the first half. The play marked a sequence where Green Bay scored 14 points in a 25-second span.

“It’s a learning experience. There’s 25 seconds left in the half and he’s trying to play bump and run on the wide receiver instead of understanding the situation there. Other than that, I thought he did a pretty good job,” Zimmer said.

Dantzler said Monday he left some plays on the field, and wishes he would’ve been more physical with Valdes-Scantley at the line of scrimmage to disrupt the route.

“The great placement on the touchdown that I gave up. I feel like I was there, he just made a perfect throw and the guy made a perfect catch,” Dantzler said.

Dantzler finished his debut with four tackles, and is learning quickly about life in the NFL as a rookie. Earlier in the game, he had Davante Adams blanketed in coverage in the middle of the field. But Rodgers was on target, and completed the pass anyway.

“I still haven’t lost my confidence, I just have to move forward and continue to prepare for the other guys I’ll be facing,” Dantzler said.

Those guys include Philip Rivers this Sunday in Indianapolis, Ryan Tannehill with the Tennessee Titans, DeShaun Watson with the Houston Texans and Russell Wilson with the Seattle Seahawks the next four weeks.

“I tried to explain to them this week with this quarterback that if they’re not tight in coverage, they’re going to watch it get caught. That part of them believing what I’m saying, different than college football, will be engrained in them now. We’re facing another good quarterback this week too, so it’s not going to get any easier,” Zimmer said.

No pressure on Rodgers most of the day, zero sacks and just two hits on 44 drop backs, combined with a young secondary was a big problem for the Vikings.

“You just stick with it. You’ve just got to keep going and keep trying to harp on them to do their best, iron out the little mistakes that they did make. It’s good to find out where we were, and where we’ve got to go from there,” Zimmer said.

Zimmer also reflected Monday on the safety that initiated the momentum going the Packers’ way. Kirk Cousins, from his own 1-yard line, dropped back on a play-action pass. Before he could turn around and survey the defense, Jaire Alexander was on a blitz and tackled him in the end zone.

“What I was told is that the corner thought it was a run, so he just kept coming. We had the guy responsible for him, but I’m not going to mention who, and he didn’t see him,” Zimmer said.

They’re not panicking, it’s too early for that. But it’s not too early to leave everything on the field against the Colts to avoid an 0-2 start.