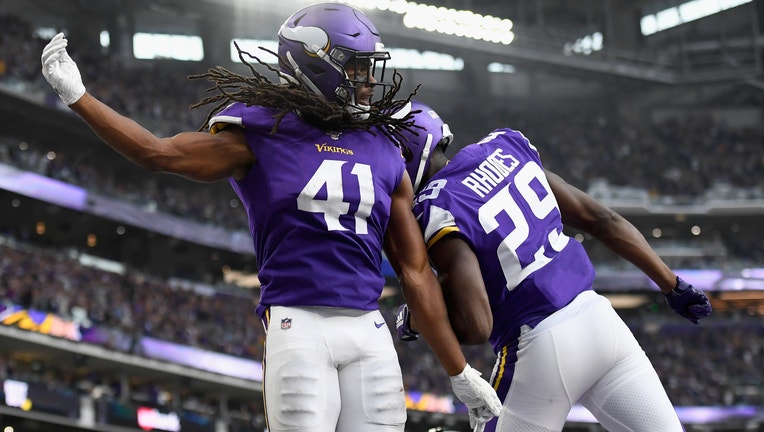 Anthony Harris #41 and Xavier Rhodes #29 of the Minnesota Vikings celebrate an interception in the end zone against the Atlanta Falcons by Harris during the third quarter of the game at U.S. Bank Stadium on September 8, 2019 in Minneapolis, Minnesota (Hannah Foslien/Getty Images)

MINNEAPOLIS (FOX 9) - Minnesota Vikings safety Anthony Harris was named NFC Defensive Player of the Week after Sunday's win over Atlanta in which he intercepted two passes that led to two touchdowns for his team.

Harris' two interceptions so far this season put him at the top of the league. The 27-year-old Chesterfield, Virginia native also recovered a fumble in the second quarter that resulted in a scoring drive by the Vikings. He also has five tackles and defensed three passes against the Falcons in the season opener and his takeaways helped the Vikings score 21 points overall.

The Vikings topped the Falcons 28-12. They play rivals the Green Bay Packers in Green Bay, Wisconsin Sunday at noon.

This is the first time Haris has earned NFC Player of the Week honors.