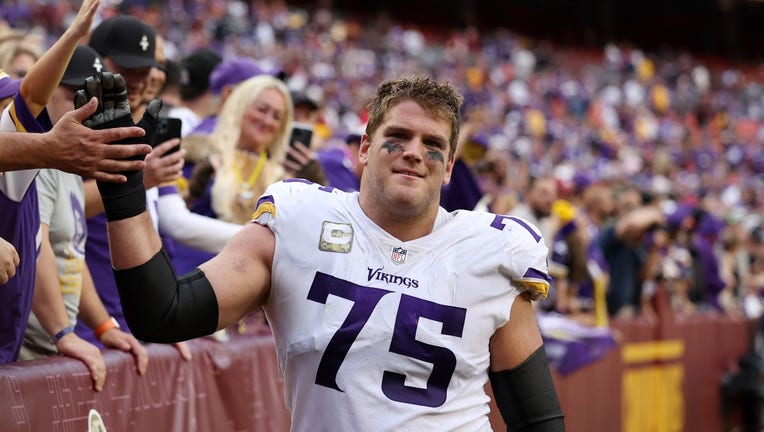 Brian O'Neill #75 of the Minnesota Vikings celebrates after the game against the against the Washington Commanders at FedExField on November 06, 2022 in Landover, Maryland.  ((Photo by Scott Taetsch/Getty Images))

MINNEAPOLIS - Kevin O’Connell made official on Wednesday what was feared after the Minnesota Vikings lost to the Green Bay Packers 41-17 at Lambeau Field last Sunday: Brian O’Neill is out for the rest of the season.

The veteran right tackle suffered a partially torn Achilles while running back as Darnell Savage returned an interception 75 yards for a touchdown. O’Neill will need surgery, was placed on injured reserve and is expected to make a full recovery before next season.

Vikings back to work with hearts heavy for Damar Hamlin

The Minnesota Vikings are back to work getting ready for the Chicago Bears, but with heavy hearts after Damar Hamlin collapsed on the field and went into cardiac arrest at Cincinnati Monday night.

O’Neill was a Pro Bowl pick last season, is a team captain and has started 75 games in four-plus seasons.

The Vikings’ offensive line is now suddenly depleted heading into the regular season finale, and potentially into the playoffs with Austin Schlottmann also going on IR due to an ankle injury. Starting center Garrett Bradbury is still out with a back injury, didn’t practice Thursday and is unlikely to play on Sunday at the Chicago Bears.

Chris Reed stepped in for third-string center duties, had two bad snaps and also had a delay of game penalty due to communication issues. Oli Udoh is expected to replace O’Neill at right tackle, leaving Christian Darrisaw, Ezra Cleveland and rookie Ed Ingram as the only healthy regular starters. The Vikings could also get Blake Brandel back from injured reserve soon.

"When you have players like that who are able to step in and play, it helps a great deal," quarterback Kirk Cousins said of Reed and Udoh.

JUSTIN FIELDS OUT SUNDAY AGAINST VIKINGS

The Vikings’ defense, one of the worst statistically in the NFL, may have dodged a bullet for Sunday’s regular season finale at Chicago. Bears’ coach Matt Eberflus announced earlier this week quarterback Justin Fields will not play against the Vikings due to a hip injury. Nathan Peterman will get the start.

In 15 starts this season, Fields has thrown for 2,242 yards, 17 touchdowns and 11 interceptions. He’s been more dangerous with his legs of late, running 10 times for 132 yards last week against the Lions. He has eight rushing touchdowns on the season, and ran for 178 yards against the Dolphins, and 174 yards in November against the Lions.

Peterman has played in two games this season, and is 3-of-5 passing for 25 yards.

With Fields out and the Cardinals unlikely to beat the 49ers, it’s very possible the Vikings could rest several defensive starters against the Bears, or limit their snaps.

VIKINGS HAVE -19 POINT DIFFERENTIAL DESPITE 12-4 RECORD

The Vikings own one of the more bizarre stats of the 2022 season through 16 games. They have the worst point differential among the current playoff teams at -19.

The Vikings are 8-1 at U.S. Bank Stadium this year, but have just a +11 point differential with 238 points scored and 227 allowed.