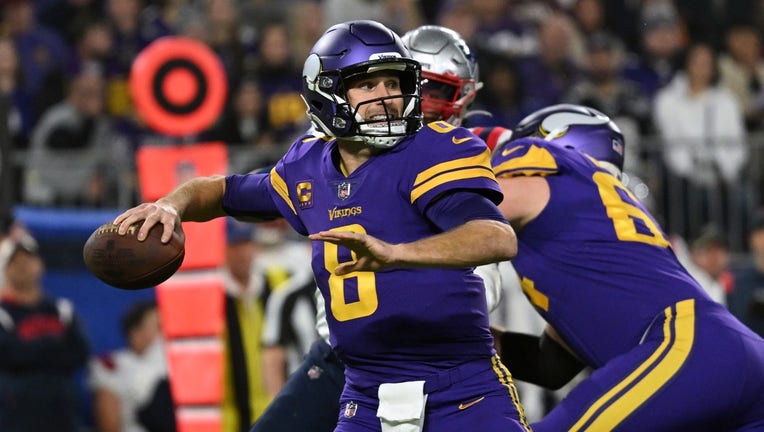 Minnesota Vikings quarterback Kirk Cousins (8) makes a pass during a game between the Minnesota Vikings and New England Patriots on November 24, 2022, at U.S. Bank Stadium in Minneapolis, MN. ((Photo by Nick Wosika/Icon Sportswire via Getty Images))

MINNEAPOLIS - Don’t look now, but the Minnesota Vikings can clinch the NFC North Division title as early as this weekend.

The Vikings (9-2) can win the division and lock up at least one home playoff game with a win over the New York Jets, and a Detroit Lions loss to the Jacksonville Jaguars. In the process, it can be argued that the Vikings have two MVP candidates in Kirk Cousins and Justin Jefferson.

It’s no secret that Cousins and former Vikings’ coach Mike Zimmer didn’t exactly have a great vibe. Zimmer called out Cousins last year for missing a night practice at training camp due to COVID-19 protocols. Cousins also missed the loss at Green Bay last year, which eliminated the Vikings from the playoffs.

Sunday night on Fox 9 Sports Now, Jim Rich talked Vikings football with Chuck Foreman as they're 9-2 after beating the Patriots.

What a difference a year, and a new regime makes. Through 11 games, Cousins is seventh in the NFL with 2,760 passing yards. His 17 passing touchdowns are ninth in the NFL. He does have nine interceptions, including one on a throw for KJ Osborn Thursday that sailed on him.

The chemistry and culture that started with O’Connell’s hire in February has translated thus far.

"Kevin has empowered me so much, this team has empowered me so much. The guys have just been tremendous," Cousins said after Thursday’s win over the Patriots. "I can’t say enough about the way that they have had my back after these interceptions, support me all week long, support me pregame in the locker room. At times it almost brings me to tears the way these guys support me and have my back, it really adds to the fun of playing and working together."

Cousins has led six fourth quarter comebacks for the Vikings this season, and they started celebrating road wins by putting diamond chains on the quarterback.

Vikings prepare for Jets and a new QB to attack

The Vikings are 9-2 and on the verge of clinching the NFC North title as they prepare for the New York Jets this upcoming Sunday.

Cousins will be the first to say it’s not all rainbows and unicorns. While we marvel at the throws he makes to Jefferson and other receivers, he anguishes over ones he missed, and turnovers. He says that’s just his personality

"This is the way I am, I’m hard on myself. I probably drive myself crazy, my family crazy being this way. it’s just the way I’m wired. I’m an improver, I’m kind of obsessed with improvement so even when things are good, my mind goes to how can they be better? You kind of torture yourself that way," Cousins said. "But I much enjoy thinking about how we can be better after a win than after a loss."

The narrative with Cousins is well-chronicled: He struggles in prime time. He's 2-10 on Monday Night Football, and now 11-18 for his career on night games. Cousins answered some of those critics Thursday, going 30-of-37 for 299 yards and three scores, including the game-winner to Adam Thielen.

"You don’t play like he did tonight without really starting to develop some ownership of our offense," O’Connell said of Cousins after Thursday’s win.

We’ll find out if it can translate to a playoff run. They’re on the verge of clinching their first division title since 2017, and first playoff berth since 2018.