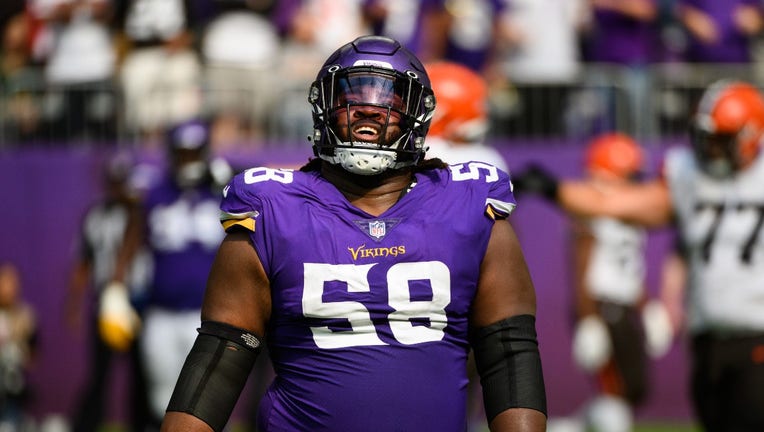 Michael Pierce #58 of the Minnesota Vikings reacts after a play in the second quarter of the game against the Cleveland Browns at U.S. Bank Stadium on October 3, 2021 in Minneapolis, Minnesota.  ((Photo by Stephen Maturen/Getty Images))

MINNEAPOLIS - The Minnesota Vikings face the L.A. Chargers on Sunday, and they’ll be without at least five regular starters on defense.

The Vikings announced Saturday they’ve placed defensive tackle Michael Pierce on injured reserve. It means Pierce will be about at least the next three games with an elbow injury that has already caused him to miss four games this season. Pierce won’t play at the Chargers, against the Packers or at the 49ers. The earliest Pierce could return is Dec. 5 against the Detroit Lions.

It’s another brutal injury blow to an already short-handed defense. Vikings GM Rick Spielman said during the team’s bye week he was hopeful Pierce would return against the Dallas Cowboys on Halloween night, but Pierce’s elbow clearly hasn’t healed like the team had hoped.

The Vikings will face the Chargers without Patrick Peterson, who is on IR at least one more week with a hamstring injury suffered at Carolina before the bye week. The secondary is also without safety Harrison Smith, who is in COVID-19 protocols after testing positive before last Sunday’s game at the Ravens. Defensive end Danielle Hunter is out for the season with a torn pectoral muscle, and Anthony Barr is out due to a knee injury that forced him to miss the first four games of the season.

The Vikings are also operating in enhanced COVID-19 protocols this week, after six players went on the reserve/COVID-19 list in the last eight days. Mike Zimmer said Wednesday a player who was vaccinated had to go to the emergency room, likely due to COVID pneumonia, after having difficulty breathing. Multiple reports since have indicated that player is offensive lineman Dakota Dozier, who went on the COVID-19 list last Friday. As a result, 29 people with the team, including Zimmer, had to undergo additional testing due to being considered close contacts.

The Vikings are 3-5 and trying to avoid their third straight loss out of the bye week on Sunday.