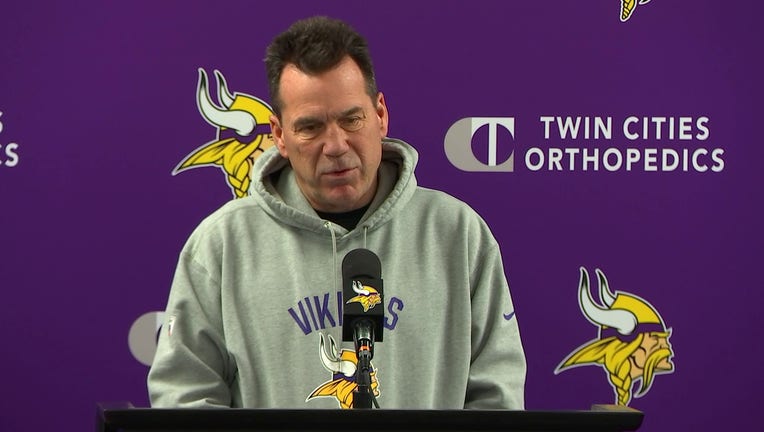 Vikings offensive coordinator Gary Kubiak announced his retirement from the NFL on Thursday.

MINNEAPOLIS - The Minnesota Vikings will have a new man in charge at offensive coordinator in the 2021 season after Gary Kubiak made his retirement official on Thursday.

Kubiak spent 36 seasons in the NFL, nine as a player and 27 in coaching and personnel roles. He was the Vikings’ offensive coordinator in 2020 after Kevin Stefanski took over as head coach of the Cleveland Browns. In 2019, Kubiak was an offensive adviser and associate head coach.

Kubiak had 87 playoff wins as a head coach in Houston and Denver, appeared in nine conference championship games and seven Super Bowls as a player and coach.

This year with the Vikings, Kubiak led the No. 4-ranked offense in the NFL. Dalvin Cook ran for 1,557 yards, led the NFL in yards from scrimmage and had 16 touchdowns. Justin Jefferson set rookie records in receptions and receiving yards, and Kirk Cousins threw for a career-high 35 touchdowns.

Kubiak released a statement through the Vikings on Thursday.

"It’s been the honor of my lifetime to work for 36 seasons as an NFL player and coach. I’ve been on a football field for most of my life, and now I look forward to stepping away from the game and enjoying more time with my family and friends.

"I offer my sincere thanks to the owners and fans of the Minnesota Vikings, Denver Broncos, Baltimore Ravens, Houston Texans and San Francisco 49ers for giving me opportunities to be a part of this great game and for treating me and my family so well over the years.

"I’ll miss the competition, the planning, game days and being part of a team. But, more than anything, I’ll cherish the friendships I've made along the way with players, coaches and staff. I love the game of football and will forever be its biggest fan," Kubiak said.

Mike Zimmer, who worked with Kubiak for two seasons, released a statement Thursday.

"Gary did a tremendous job with us at the Vikings over the past two seasons. I have a great deal of respect for him as a coach and as a person, and I’m glad I was able to coach with him. He has had one heck of an NFL career as a player, assistant coach and head coach, and I am really happy for Gary and his wife Rhonda as they head off to their ranch. We will all miss Gary at the Vikings organization and wish him the very best," Zimmer said.

"Gary Kubiak is leaving an impressive legacy in the NFL, and his impact will be shown for decades to come in the players he’s guided and the coaches he’s mentored. There’s not a better man in our business than Gary. The entire Vikings organization appreciates what Gary did for us and what he has meant to the game," Spielman said.

Kubiak’s retirement means the Vikings will have a new offensive coordinator for the fourth straight season, and sixth in the last eight seasons.