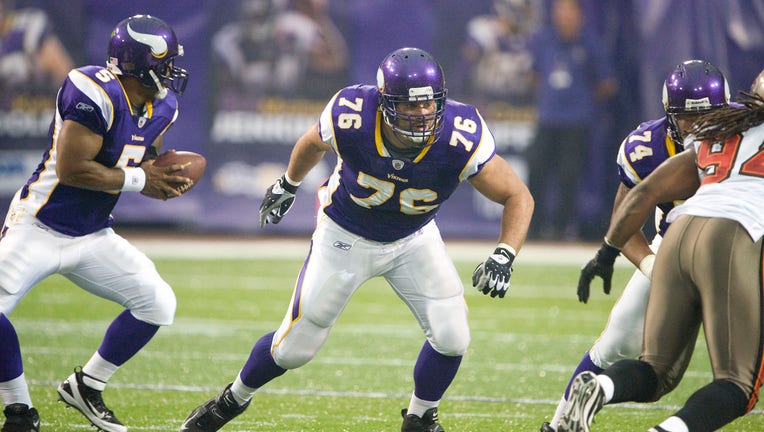 Steve Hutchinson #76 of the Minnesota Vikings blocks during an NFL game against the Tampa Bay Buccaneers at Mall of America Field at the Hubert H. Humphrey Metrodome, on September 18, 2011 in Minneapolis, Minnesota. (Tom Dahlin / Getty Images)

MINNEAPOLIS - The Minnesota Vikings host the Dallas Cowboys for Sunday Night Football on Halloween, and the team will be honoring one of its all-time greats at halftime.

Former Vikings offensive lineman Steve Hutchinson will receive his NFL Hall of Fame ring during a halftime ceremony at U.S. Bank Stadium Sunday night. Hutchinson was inducted to the Hall of Fame as a member of the 2020 class, and was officially enshrined at the Pro Football Hall of Fame back in August.

As part of the game festivities, Hutchinson will sound the Gjallarhorn before kickoff. Hutchinson played 12 NFL seasons, his first five with the Seattle Seahawks before signing with the Vikings in free agency prior to the 2006 season. Hutchinson was a left guard for Minnesota from 2006-2011, before spending his final NFL season with the Tennessee Titans.

"You come up to do things like this, do the ceremony, get the ring, see the guys that I played with come back. It's a humbling thing, especially for me," Hutchinson told reporters on Friday. "Anybody that was covering the team when I was here, everybody jokes about it but I wasn't much into talking publicly about anything really. It's an honor, at the same time it kind of puts a nice bow on a 12-year career."

Hutchinson was named to the Pro Bowl seven times, and was selected First Team All-Pro five times, including three with the Vikings. Hutchinson started 169 career games over 12 seasons.