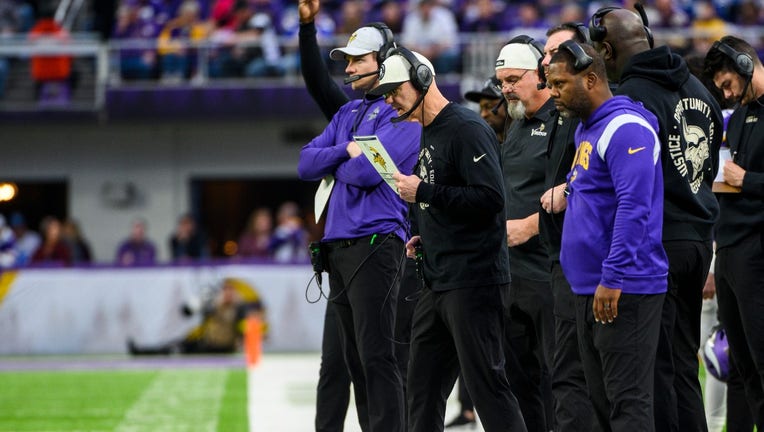 Defensive coordinator Ed Donatell of the Minnesota Vikings calls a play in the second quarter of the game against the Indianapolis Colts at U.S. Bank Stadium on December 17, 2022 in Minneapolis, Minnesota.  ((Photo by Stephen Maturen/Getty Images))

MINNEAPOLIS - The Minnesota Vikings would rather be preparing to face the San Francisco 49ers in the NFC Divisional Playoffs, but they’re now in offseason mode after a 31-24 loss to the New York Giants on Wild Card Weekend.

The Vikings’ first season under the leadership of Kwesi Adofo-Mensah and Kevin O’Connell ended with 13 wins, and the franchise’s first NFC North Division title in five seasons. They earned a home playoff game, but couldn’t take advantage of it.

The Minnesota Vikings are holding exit meetings and evaluating players and coaches this week after a season-ending loss to the Giants in the NFC Playoffs.

Adofo-Mensah and O’Connell wrapped up the 2022 season, speaking with reporters on Wednesday from TCO Performance Center. They’ve had three days of exit meetings with players, and evaluations are underway.

"At the end of the day, we didn’t play well enough to continue on. That’s something that we’re feeling right now, and that hurts for a lot of reasons. I think these players showed so much, they deserved to play longer," Adofo-Mensah said. "I hurt for them because I feel like they deserved to be playing longer. Ultimately we didn’t accomplish the goals we wanted to accomplish, but the things we did accomplish were incredibly impactful. I think we laid a foundation for where we want to go."

O’Connell advanced that message, saying it’s now about making sure their entire process is done at a championship standard.

"The standard of knowing we’ve got the culture, knowing we’ve got the right things going in this building, the last phase of that is the accountability to each other to make sure that standard is championship-worthy," O’Connell said. "We’re putting ourselves in that conversation and asking ourselves with everything we do, is it championship-worthy? They understand that and they’re motivated for that."

After about seven minutes of opening statements, one of the first questions asked to Adofo-Mensah and O’Connell was about the future of defensive coordinator Ed Donatell. The Vikings were confident they had the right veterans and skill players in place to run a 3-4 defense.

The on-field performance showed otherwise. The Vikings ranked 31st in total defense in the regular season. O’Connell was non-committal, and Adofo-Mensah didn’t offer a response if Donatell will be back.

"I’m in that evaluation mode of everything that we did. I think that’s really important as part of self-reflecting, part of us reflecting as a staff is making sure we’re taking a look at every aspect of our football team and our coaching staff to make sure that we’re doing everything within my responsibility and power to put our players and our organization in the best possible situation to have success," O’Connell said. "That’s an ongoing process."

They allowed at least 400 total yards 10 times in 18 games, including 431 to the Giants. Daniel Jones became the first quarterback in playoff history to pass for at least 300 yards, two touchdowns and run for at least 70 yards.

Changes will have to be made, but it remains to be seen if they'll be in scheme, personnel or coaching.

"Understanding what we were this year, the reality of it and being accountable to that," O’Connell said. "Then understanding in my role and responsibility is fixing the problems and making sure whatever path we take moving forward is in the bests interests continuing on a track to be at that championship standard."

VIKINGS EXPECT KIRK COUSINS ‘TO BE OUR QUARTERBACK’

Kirk Cousins had one of his best seasons yet with the Vikings, but it didn’t translate to a deep playoff run. In five seasons in Minnesota, he has one playoff win. Cousins threw for more than 4,000 yards for the fourth time in the last five seasons, and he helped Justin Jefferson set more records.

Cousins had 29 touchdowns, and a career-high 14 interceptions. He was also sacked a career-high 46 times. He made $40 million this season, and is set to make $35 million in 2023. Will the Vikings re-work his contract again? We don’t know yet, but the team wants to keep him.

"It’s our expectation that he will be our quarterback. I can’t say exactly how that would look," Adofo-Mensah said.

The Vikings are going to have some difficult conversations this offseason with 15 players set to become free agents. Justin Jefferson is entering the final year of his rookie contract, but the front office is already working to keep him in Minnesota long-term.

Jefferson led the NFL with 128 catches for 1,809 yards and eight touchdowns in the regular season. He has the NFL record for receiving yards in a player’s first three seasons. He has the Vikings’ single-season record for receiving yards, and nearly chased down Calvin Johnson’s NFL record. He’s the best at this position in the league, and he’s set to receive a huge pay day.

Adofo-Mensah said there has already been initial dialogue with Jefferson’s agent about his future in Minnesota.

"I wouldn’t use the word challenge. You’ve got a special player, a special person. Those aren’t problems, at least those are champagne problems," Adofo-Mensah said.

Jefferson’s focus is on winning a Super Bowl.

"If they want me here, I’m here. That’s not something I can really control. It’s not something I’m really worrying about. I want to win a Super Bowl. That’s the thing that I’m most focused on," Jefferson said.