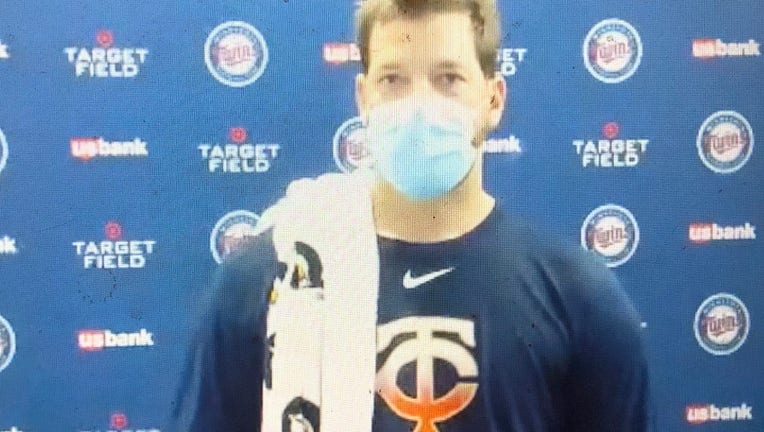 Rich Hill took the mound Monday and pitched against live hitters for the first time in about eight months after having off-season surgery on his left elbow.

MINNEAPOLIS - Rich Hill wasn’t exactly sure what to call it, but lived a bit of a milestone moment at Minnesota Twins summer camp on Monday.

He got on the mound and pitched in a competitive environment, facing live batters, for the first time in about eight months. He threw four simulated innings, and if things progress as planned, he could have a spot in the starting rotation when the season starts July 24 against the Chicago White Sox.

“It was obviously another road to recovery if you want to call it that. Just fighting back and getting back on the mound was huge,” Hill told reporters on Tuesday via Zoom. “I put in the time and put in the effort, it’s definitely paid off. I feel great and yesterday was just one step in the right direction.”

Hill had surgery last November to repair a partial tear in the ulnar collateral ligament in his left arm, which he originally tore in 2011. In 13 starts last year for the L.A. Dodgers, Hill was 4-1 with a 2.45 earned run average.

He might never say it out loud, but the Covid-19 pandemic delaying the start of the baseball season was a blessing in disguise for Hill. In a normal season, he would’ve started the season on the injured list, not ready for pitching until June. But with baseball halted for about four months by the time play starts later this month, he should be ready physically and mentally.

Twins manager Rocco Baldelli liked what he saw on Monday.

“He came in and looked really good. He was already making adjustments, a couple of things and really locking in, location-wise. The stuff was good. Just a really good first day,” Baldelli said.

Hill knew he would have to be diligent in his rehab from surgery and follow the orders of doctors. It started to pay off for the now 40-year-old after his first long toss session.

He doesn’t want to rush his comeback, no pitcher returning from elbow issues wants to take that risk. But he also wants to be out there when it’s time for his name to be called.

“This next 2.5 weeks that we have, I hope and I feel like I should be ready to go out there and perform. It was great yesterday being able to see hitters, first time since I had surgery. The more times I can get out there in that type of situation, I’ll be much more well off to go out there and compete at my best,” Hill said.

Hill went back to his home town of Milton, Mass., when Major League Baseball shut down Spring Training due to the Covid-19 pandemic. He was still working his way back from elbow surgery, and spending time with his wife and son.

One thing he is adamant about during the global pandemic is staying safe. He wore a mask while talking to media on Tuesday, always has sanitizer at the ready and practices social distance regularly. Proof that it was working in Minnesota and across the country, at times, gave him the confidence to fly to Minnesota for summer training.

He also says they’ll need to be extra diligent when the season starts and they’re on the road. That means go to the hotel, the ballpark and back. Hill made clear one of his frustrations with MLB is the consistency of Covid-19 testing.

Players get tested about every other day. Clubhouse staff get tested about twice per week. Miguel Sano and Willians Astudillo are the two big league Twins players to test positive so far. Hill says testing needs to be more consistent across the team.

“I have a real big issue with that because I think they should be getting tested as much as we are, and anybody around the team should be getting tested just as much as the players are. I feel strongly about that,” Hill said. “That’s something that should be addressed and it should be fixed as soon as possible because they’re going home to their families, going home to their loved ones, it’s not right that they’re not getting the opportunity to have the same testing and availability that we are. That’s something that should be happening.”