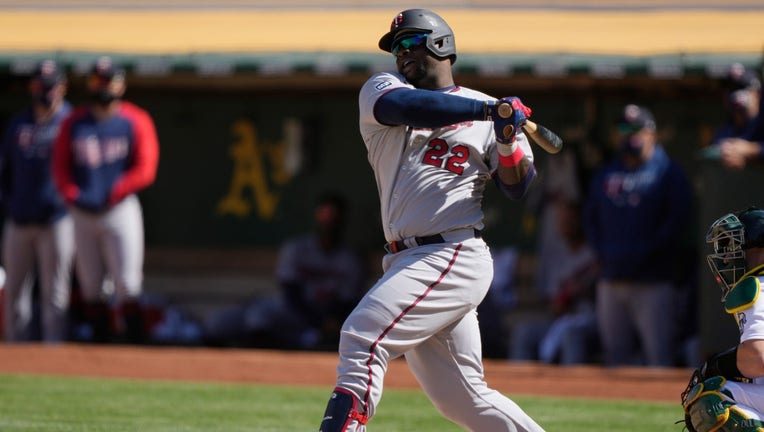 Miguel Sano #22 of the Minnesota Twins bats against the Oakland Athletics in the second inning during game one of a double header at RingCentral Coliseum on April 20, 2021 in Oakland, California. ((Photo by Thearon W. Henderson/Getty Images))

MINNEAPOLIS - The Minnesota Twins open a three-game series against the Pittsburgh Pirates Friday night at Target Field, and they won’t have slugger Miguel Sano in the lineup.

Sano, who has had a slow start to the season, was placed on the 10-day injured list with a right hamstring strain. The move is retroactive to April 21. Sano played in the first game of a doubleheader on Tuesday, a 7-0 loss to the Oakland Athletics, and did not play in Game 2, a 1-0 loss.

The Twins are also without Max Kepler, Andrelton Simmons, Caleb Thielbar, JT Riddle and Kyle Garlick, who are all on the team's COVID-19 IL.

Kirilloff was arguably the surprise move of Spring Training, not only not making the Opening Day roster, but also not being selected to the team’s Taxi Squad. Gordon was 2-for-10 and scored one run in 11 Spring Training games with the Twins, and will be making his Major League debut.

The Twins have lost four straight, are 1-9 in their last 10 games and are in last place in the American League Central Division at 6-11.