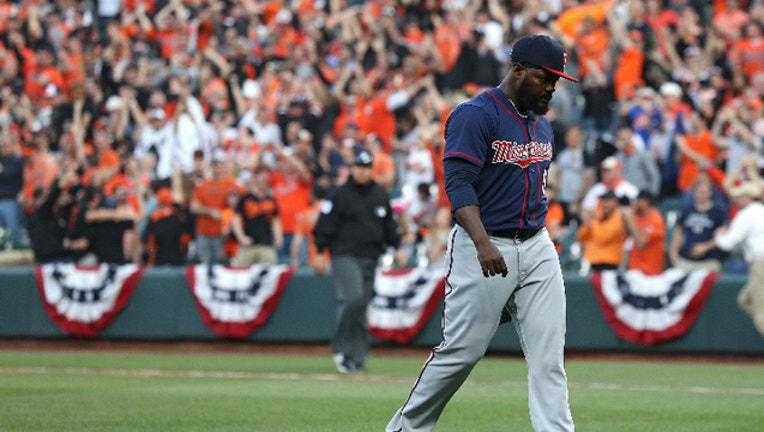 BALTIMORE, MD - MARCH 29: Pitcher Fernando Rodney #56 of the Minnesota Twins walks off of the field after giving up a walk-off home run to Adam Jones #10 of the Baltimore Orioles during the eleventh inning. (Photo by Patrick Smith/Getty Images)

After working out of trouble in the 10th, Rodney's debut with the Twins came to an abrupt end when Jones went deep to left.

Richard Bleier (1-0) worked one inning for the Orioles, who made the most of five hits.

Minnesota has lost nine of its last 10 openers, including three against Baltimore.

Baltimore missed a chance win it in the 10th when Jonathan Schoop bounced into a double play against Rodney (0-1) with the bases loaded after the Twins stacked the infield with five players, leaving just two outfielders.

An opening day that featured brilliant pitching by starters Dylan Bundy and Jake Odorizzi took a sharp turn as a result of bullpen breakdowns by both teams.

Not long after that, the sellout crowd of 45,469 stood in unison as Brad Brach -- the anointed closer for injured Zach Britton -- attempted to seal the victory in the ninth. With two outs, however, pinch-hitter Robbie Grossman blooped a two-run single to tie it.

Bundy gave up five singles, walked one and struck out seven in seven innings. He allowed only two runners past first base, and no one advanced to third.

Odorizzi was exceptionally sharp in his Twins debut, allowing two hits and two walks with seven strikeouts over six innings.

As soon as he left, however, Baltimore broke through against Duke, who was also pitching in his first game with Minnesota after signing as a free agent in December.

Duke began by striking out Trey Mancini, who reached when the wild pitch got past catcher Jason Castro and went to the screen.

Another wild pitch moved Mancini to second base. Duke then struck out Tim Beckham, issued an intentional walk to pinch-hitter Danny Valencia and struck out Craig Gentry before Joseph tripled to right-center.

Duke ended the uprising with a baseball rarity: his fourth strikeout of the inning, against slugger Chris Davis.

Gentry made a leaping catch at the right-field wall to rob Twins cleanup hitter Eddie Rosario of a potential home run.

Gentry timed his jump perfectly before reaching over the 7-foot barrier to make a backhand grab.

Twins: RHPs Ervin Santana (finger) and Phil Hughes (oblique strain) were formally placed on the 10-day DL. Twins manager Paul Molitor said Hughes "is doing better" and that the 2010 All-Star could be "in the mix" by the second week of April.

Twins: RHP Kyle Gibson starts Saturday night in the second game of the three-game set. Gibson is 2-2 with a 5.89 ERA in seven career starts vs. Baltimore.

Orioles: RHP Andrew Cashner makes his Baltimore debut, coming off an 11-win season with Texas. He signed with the Orioles as a free agent in February.