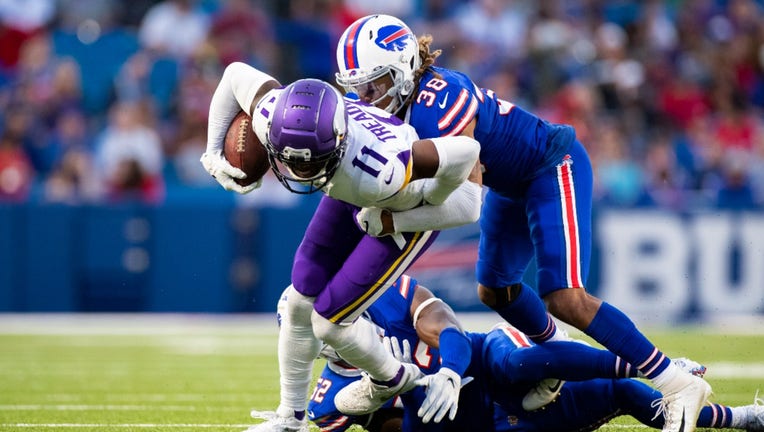 Ryan Lewis #38 of the Buffalo Bills tackles Laquon Treadwell #11 of the Minnesota Vikings during the first half of a preseason game at New Era Field on August 29, 2019 in Orchard Park, New York. Buffalo defeats Minnesota 27-23. ((Photo by Brett Carlsen/Getty Images))

EAGAN - Marcus Sherels and Laquon Treadwell spent a combined 11 seasons with the Minnesota Vikings and departed the team for different reasons this season. Now, they’re both back in Viking purple as the team prepares to head to Chicago on Sunday for a key NFC North Division match-up.

Sherels, a Rochester native, left Minnesota and signed with the New Orleans Saints in free agency. He was set to compete for their punt and kick return jobs after being the primary punt returner for the Vikings for eight seasons.

Just days before the Saints were hosting the Vikings in Week 1 of the preseason, Sherels was sidelined with a hamstring injury. It forced him to miss all of the preseason, and he agreed to an injury settlement with the team. That allowed Sherels to pursue furture opportunities with other teams.

He’s got a new locker at the TCO Performance Center training facility in Eagan, but said Wednesday, “It kind of feels like I never left.”

“This is home for me. It’s always been home and it always will be home so it’s good being back. The guys have embraced me with open arms and I’m ready to help and contribute in any way I can,” Sherels said. “I’m 100 percent now.”

The move made all the sense in the world for the Vikings. Chad Beebe had taken over punt return duties after several players got reps in Training Camp and throughout the preseason. Beebe injured his ankle during Saturday’s win over the Oakland Raiders and was placed on injured reserve, meaning he’s out at least six weeks.

Sherels was the logical choice. He’s got 231 career punt returns for more than 2,400 yards and five touchdowns.

“Marcus is a great kid, No. 1. We needed a punt returner, so that was pretty simple,” Vikings coach Mike Zimmer said. “He’s a guy we know, he’s always been reliable, catches the ball well. He’s been a good punt returner.”

Sherels came back to Minnesota to continue training after reaching his injury settlement with the Saints. He had to stay ready in the event his phone rang.

“You always have to be ready and be in shape, you never know when you’re going to get that call,” Sherels said.

Treadwell gets a ‘fresh start’ with Vikings

Treadwell’s NFL future was nothing short of uncertain after not making it through the Vikings’ final roster cuts before Week 1 against the Atlanta Falcons.

He had kept busy in the three weeks since getting his release. He went back home to Chicago to attend his grandmother’s funeral, and spent a weekend with his daughter for her birthday. He also kept in contact with Zimmer and reached out to various players, including Brandon Marshall, to get perspective on what to do next after getting cut.

Once a first-round draft pick of the Vikings, there was a chance his football career was over. He also thought he might end up on a different team. He made eight catches for 89 yards in three preseason games, including four catches for 47 yards in the first preseason home game at U.S. Bank Stadium. Zimmer went so far as to say “I guess we’re showcasing him a little bit” after that game.

Treadwell had visited the Buffalo Bills and Detroit Lions since his release, but hadn’t signed with any teams. Up until he got the call earlier this week, he “had no idea” he was coming back to the Vikings.

“Obviously it was tough, I’ve been here three years going on four. Been playing with these guys for a long time, this is like my second family. My brothers, been through a lot of battles, a lot of ups and downs together and they’ve always had my back. I’ve always had their backs, so it was hard for me to cope with a little bit,” Treadwell said.

Treadwell has 56 career catches for 517 yards and one touchdown in three seasons with the Vikings. But he’s also had drops in key moments, and hasn’t had the consistency coaches would like to see. The writing was on the wall for Treadwell, who rarely got reps with the first-team offense in Training Camp or other practices.

Zimmer spoke with Treadwell after his release about moving forward, saying Wednesday he’s “rededicated himself to try to do the things he needs to get done.”

“I’m sure he was disappointed but I talked to him about really what he needs to do to prove that this is the thing that he really wants to do, how important this is to him. I think it was always important to him, but I think he might have went about it the wrong way,” Zimmer said. “So I just tried to give him some insight of what he has to do moving forward and hopefully we see that.”

Treadwell said his release and talking with other coaches, players and teams gave him a fresh perspective on his situation.

Now that he’s back in Minnesota, all he cares about is winning.

“Coming back here, it’s all about helping the team win. I’m honored, I’m grateful to be back here and just looking forward to helping the team,” Treadwell said. “Doing everything I can to make sure I’m ready to play if the opportunity presents itself.”