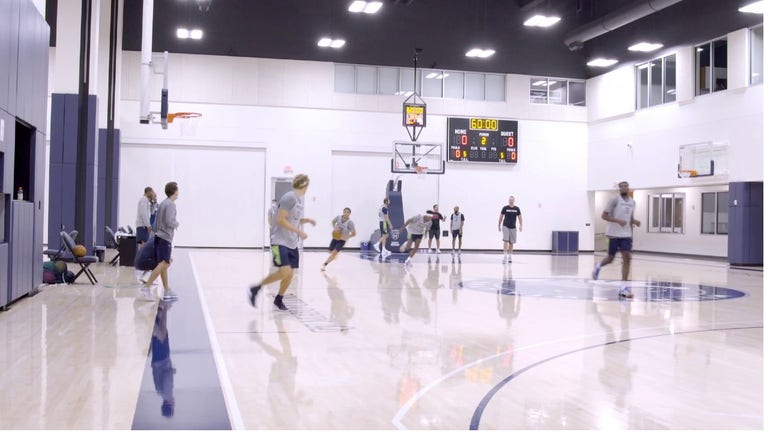 The Minnesota Timberwolves had been hosting individual off-season workouts at their practice facility while the NBA bubble is going about its business in Florida. But Wednesday, balls were hitting the floor, whistles were blowing and shots were going in the net as the Wolves held their first team practice since March 11.

For coach Ryan Saunders, it was a sight for sore eyes.

“I’ll just say that as a team, you could tell that those guys were really excited to be out there and be out there competing. Able to connect with each other, able to put an NBA practice jersey on, that was fun for these guys,” Saunders said. “We know the basketball will get better, honestly it was a lot better than I expected it to be after a six-month hiatus.”

For that first full practice to happen, the Wolves agreed to be a part of the NBA’s In-Market Program, which was designed for the eight teams not invited to the NBA bubble in Florida. The Wolves were 19-45 when the NBA suspended play due to the COVID-19 pandemic, 13th in the Western Conference.

Wolves players and coaches went into a 48-hour quarantine before Wednesday’s first workout, they’re staying at a hotel together for the next few weeks and they’re getting tested daily to make sure workouts are safe. They’re abiding by strict COVID-19 protocols so they can get their work in, and get better together.

“This time is important, not just for them to get to know us and the system, but for us to get to know them too,” Saunders said. “We want to give these guys time to compete and time to shake the rust off. A lot of them haven’t done anything competition wise in close to half a year, which is pretty unbelievable to even say.”

He’s right. The Wolves haven’t done anything together before Wednesday since March 11. They were preparing to get on a plane to head to Oklahoma City. The night prior, the Thunder and Utah Jazz had their game postponed after Rudy Gobert became the first player to test positive for COVID-19.

That week, the NBA made the tough decision like many other sports to shut down.

“It’s unbelievable to think we haven’t been together since March 12 as a group. That was the last time that we were all together and able to have the large group interaction. Finally we have a little bit of certainty for the next couple weeks here,” Saunders said.

They need the time together, playing and otherwise. It feels like a lot longer than seven months ago, during the February trade deadline, that Gersson Rosas overhauled the roster and brought star guard D’Angelo Russell into team up with Karl-Anthony Towns. But due to injuries, the duo played just one game together. The Wolves feature 10 players who have two years or fewer of league experience.

They’ll practice, eventually have 5-on-5 scrimmaging and also going to take time to bond off the court. There will be ping pong and air hockey at the team hotel, the team will get together to watch the NBA playoff bubble and Saunders is encouraging organic conversations.

Saunders sported a “Starts With Us” T-shirt during Wednesday’s Zoom session with reports. The Wolves and Lynx have been active with social justice causes since the death of George Floyd in south Minneapolis. Saunders is encouraging players to bond and talk, and have uncomfortable conversations.

“You never know when a conversation or a bonding moment will find its way into one of those interactions,” Saunders said. “We have a philosophy as a staff that we believe in organic, meaningful relationships and conversations and not trying to force things.”