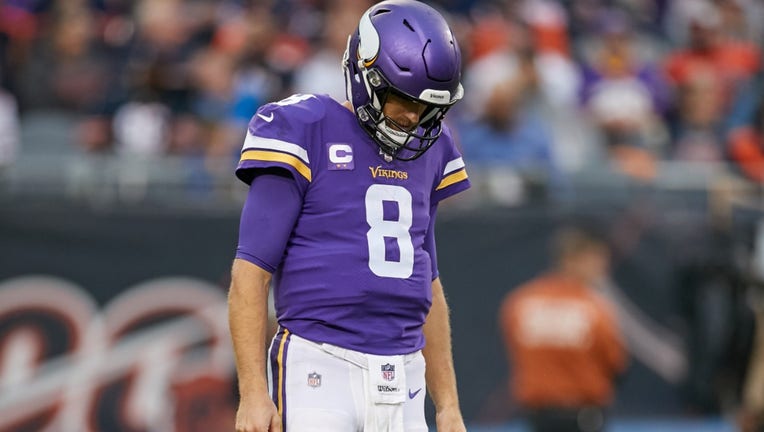 Minnesota Vikings quarterback Kirk Cousins (8) looks on after a play in game action during a game between the Chicago Bears and the Minnesota Vikings on September 29, 2019 at Soldier Field in Chicago, IL. ((Photo by Robin Alam/Icon Sportswire via Getty Images))

MINNEAPOLIS - The Minnesota Vikings will do everything they can not to let a 2-2 start dictate their season.

But the reality is they’re currently last in the NFC North Division after four games. They had two pivotal chances for road wins within the division, and came up short both.

Sunday’s 16-6 loss at Chicago was especially frustrating. The Vikings brought in Gary Kubiak and promoted Kevin Stefanski in the offseason, hoping a revamped offensive plan and a healthy Dalvin Cook would fix exactly what transpired.

The NFL’s leading running back ran into a brick wall most of the day with 14 carries for 35 yards, his worst game of the season after going for at least 110 yards in each of his first three games. The Vikings, ranked No. 2 in rushing in the NFL entering Sunday’s game, managed just 40 total yards on the day.

To compound the problem, Kirk Cousins couldn’t locate open receivers the few chances he had time to throw. Cousins was also sacked six times, and the Bears' defense had him uncomfortable most of the game.

A deep pass to Adam Thielen that should’ve gone for a touchdown was just slightly overthrown. Little errors in big spots has the frustration mounting, just four games into a long season.

And make no mistake about it, Thielen is frustrated. He had just two catches for six yards on Sunday. He’s got 13 catches through four games this season. This time last year, he had 40 catches.

Thielen went out of his way Monday to say his frustration and postgame comments Sunday weren’t directed at Cousins.

“It was a very broad sense. Any team is going to tell you you can’t be one dimensional and that’s not a shot at anyone. That’s not taking shots on coaches, players, nobody. That’s just being real and saying that you can’t just be a run team, you can’t just be a pass team and expect to have success in this league,” Thielen said.

He would know as well as anyone. After all, it was Thielen who entered the NFL record books last year with eight straight 100-yard receiving games to start the season. They were all with Cousins, the $84 million man, running the offense.

But the numbers don’t lie. Cousins is 5-27 for his career against teams with an above .500 record. That includes a 1-8-1 mark with the Vikings.

Mike Zimmer is trying his best to keep it all in perspective, and keep his quarterback confident. After a tough game at Lambeau Field in Week 2, he said has “the utmost confidence” in Cousins.

The turnovers also continue to be an issue. Cousins fumbled twice on Sunday, losing one. He’s fumbled six times this season and in 20 games with the Vikings, has coughed up the football 15 times and lost nine.

That said, Zimmer wants his quarterback to remain confident and aggressive. Cousins attempted 36 passes on Sunday, and 20 of them were either behind or within five yards of the line of scrimmage.

“There’s times you’ve just got to pull the trigger and you just gotta believe that you’re going to make the throw. We’ve just got to keep working on it,” Zimmer said.

Cousins has made the big plays before. He hit Stefon Diggs for a long touchdown at Green Bay in Week 2. He got Thielen for a 35-yard score against Oakland in Week 3. But he averaged just 6.5 yards per throw on Sunday.

“We know how good we can be and when you don’t put that performance out there, that’s what’s frustrating,” Thielen said.

Zimmer won’t let a 2-2 start define the Vikings, but they’ve now created an uphill climb the rest of the season to contend in the NFC North.

“This team won’t be judged in September. We’ve had in the NFC, the leading team has 3 wins, so just keep fighting and keep going,” Zimmer said.