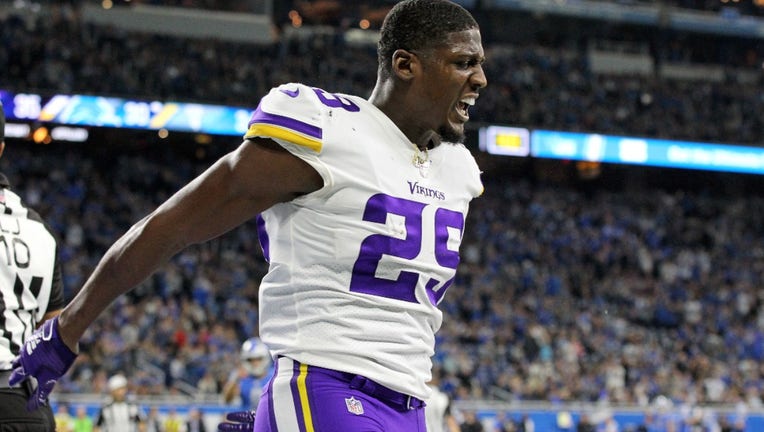 Minnesota Vikings cornerback Xavier Rhodes (29) reacts to a play during the second half of an NFL football game against the Detroit Lions in Detroit, Michigan USA, on Sunday, October 20, 2019 ((Photo by Jorge Lemus/NurPhoto via Getty Images))

EAGAN - Minnesota Vikings cornerback Xavier Rhodes issued a public apology on Wednesday to his team, the organization and his family for his actions during Monday night’s 37-30 loss at Seattle.

Rhodes stood in front of his locker and told reporters, “I know my role and I need to play it better.”

Rhodes had an unnecessary roughness penalty in the third quarter and a coverage breakdown in the fourth quarter in the team’s loss on Monday Night Football that directly led to 14 points for the Seahawks.

The coverage breakdown, with five seconds left in the third quarter, was the more glaring error as the Seahawks took a 27-17 lead into the fourth quarter. Russell Wilson hit David Moore for a 60-yard touchdown. Rhodes was in coverage on Moore, and let him go deep thinking there was safety help behind him.

The problem there is that safety Harrison Smith was at the line of scrimmage attempting to get pressure up front. Rhodes threw his hands up in confusion after the play, then was livid on the sideline with coaches and teammates. He threw his helmet at least once in frustration, and talked with Smith about the miscommunication.

On Wednesday, Rhodes took ownership of the play and his reaction.

“I just want to start off by saying I apologize to the organization, my team, my family, you know how I reacted out there on that field Monday night. I mean that’s not the way I should carry myself, especially as a leader on this team. I apologize to definitely Coach Zim, and the things he has taught me, I shouldn’t react that way towards him or towards my team, period. I know my role and I need to play it better,” Rhodes said.

Rhodes added, “One play, it was my fault on the touchdown and that’s how I’m going to leave it. I’m not getting into any details about that, it was 100 percent my fault, no one else. I’m supposed to be in a certain spot at a certain time, and I wasn’t there. Like I said, I’m a leader on this team, I’ve been a leader for a while, and I and I need to do better and play my role a lot better than I’ve been playing lately.”

It’s been a different year for Rhodes, and a frustrating one at that. It wasn’t that long ago that the seventh-year veteran was in the prime of his career. Opposing quarterbacks rarely threw at him, prompting the nickname, “Rhodes Closed.”

Rhodes was an All-Pro pick at his position just two years ago.

He’s being targeted more this season, and it’s also leading to more penalties. Rhodes was flagged Monday night for unnecessary roughness while finishing a tackle that went out of bounds early in the third quarter. Chris Carson followed with a 25-yard gain down to the Vikings’ 5-yard line, and Rashaad Penny scored two plays later to tie the game 17-17.

Rhodes leads the NFL among defensive backs with eight penalties called for 139 total yards, which leads the NFL. Four of them are for pass interference.

This year, Rhodes is allowing a career-high 12.2 yards per reception. Moore’s touchdown catch is his longest reception allowed, and the catch percentage against him is 86.9, the highest of his career. He’s also on pace to allow more than 800 receiving yards, 70 catches and 13 penalties.

“It’s just been what’s been going on this year. I’ve been battling some things, but that’s no excuse. That’s no excuse, when I’m out there on that field, everything I’m battling has to go away,” Rhodes said.

Rhodes is making $10.4 million in base salary this season, and is currently under contract with the Vikings through the 2022 season. He did respond to Monday's adversity by forcing a fumble that the Vikings recovered and turned into six points in the fourth quarter.

Vikings coach Mike Zimmer said Wednesday he hasn’t spoken with Rhodes individually since his sideline outburst. Rhodes was benched for two consecutive series after being seen yelling at coaches, and having a short, but heated talk with linebacker Anthony Barr.

Zimmer also said he will not evaluate Rhodes’ play with the media until after the season. He added he’s not concerned about his relationship with Rhodes, and has “a ton of respect for him.”

For the season, Rhodes is fourth on the Vikings’ defense with 55 tackles, including 46 solo tackles.

Rhodes will need to figure some things out, and quickly. The Detroit Lions are coming to town this weekend, and in the last meeting between the two teams, Rhodes was in coverage for at least two of Marvin Jones Jr.’s four touchdowns.