Sylvia Fowles return for one last season with Lynx

Sylvia Fowles is coming back for one last run with the Minnesota Lynx, but she wants no part of a goodbye tour or farewell.

MINNEAPOLIS - Sylvia Fowles is coming back for one last run with the Minnesota Lynx, but she wants no part of a goodbye tour or farewell.

Fowles is entering her 15th WNBA season as has accomplished just about everything that can be done on a basketball court. She’s won two WNBA championships with the Lynx, won WNBA Finals MVP honors in both title runs and was the 2017 WNBA MVP. Fowles has also won four Olympic gold medals with the U.S. Women’s basketball team.

Fowles and Lynx coach/general manager Cheryl Reeve spoke with reporters via Zoom Wednesday morning. The focus is clear: It’s about sending the star center out a champion. 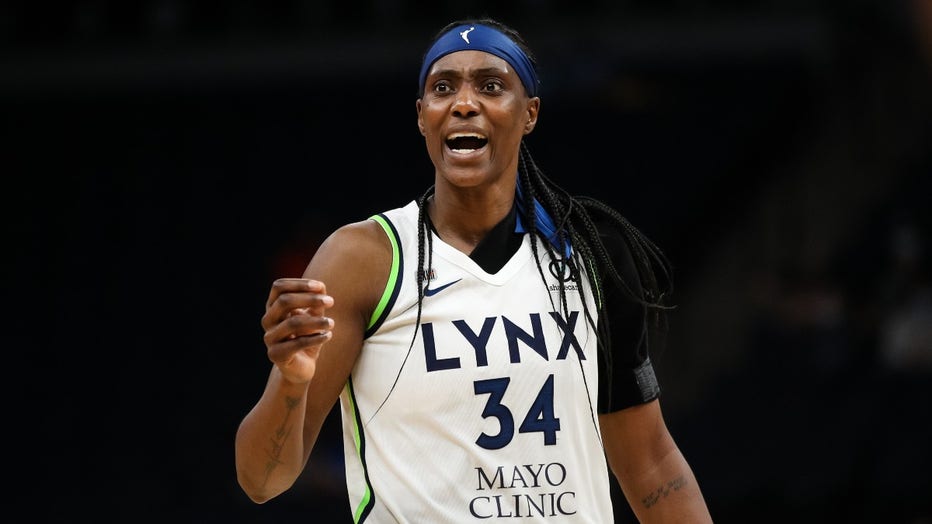 Sylvia Fowles #34 of the Minnesota Lynx reacts to a call on the court in the second half of the game against the Los Angeles Sparks at Target Center on September 2, 2021 in Minneapolis, Minnesota. The Lynx defeated the Sparks 66-57. ((Photo by David Berding/Getty Images))

Fowles was a free agent, but she said it was a no-brainer for her to return to the Lynx. The 2022 season will be her last as a player. She came to the Lynx in 2015 via trade, and hasn’t looked back since.

"It’s such an honor to want to play for an organization like the Lynx. It pretty much was a no-brainer to choose to come back this year and finish out my season. That had a lot to do with the fans and making sure they get their appreciation of what I bring to this team. Here I am," Fowles said.

Reeve said Fowles is the best center to ever play the women’s game. The numbers seemingly back that up.

Fowles is coming off a 2021 season where she won the WNBA Defensive Player of the Year for the fourth time in 14 seasons. She was second in the WNBA last season in rebounding (10.1), steals per game (1.8) and blocks per game (1.8). She’s the first player since Yolanda Griffith in 1999 to rank in the top five in all three categories in the same season.

She also averaged 16.1 points per game, marking the sixth time she’s averaged a double-double over a full season. She’s entering her eighth season with the Lynx and is the franchise leader in field goal accuracy (60.9 percent), rebounds per game (9.8), blocks per game (1.6), total blocks (309) and double-doubles (88). She’s the franchise’s all-time leader in rebounds (1,880), is third in franchise history in points per game (15.9) and fifth in total points (3,056).

Fowles, the No. 2 overall pick by the Chicago Sky in 2008, is a seven-time All-Star. Last September, Fowles was named to the W25, a list of the 25 greatest and most influential players in WNBA history, joining former Lynx players Seimone Augustus, Maya Moore, Katie Smith and Lindsay Whalen.

"The best center in the truest terms of being a center. Syl has done everything. In terms of her dominance physically, I think it starts there," Reeve said. "Her competitive drive, her passion, her will to win, what the produces in the way of statistics. Every statistical category you can think of, Syl has dominated. For me, it’s not even close."

Fowles isn’t in the mood to say goodbyes in her final season. She’d rather focus on winning a championship.

"I actually wanted no parts of the finality at all. When we started talking about me coming back, I tried to express and stress how I just wanted this thing to be smooth and without attention, and they was not going for it," Fowles said. "If I would’ve had my way, I would’ve just crept under the radar. I appreciate the love and support, but I wasn’t looking for the big hurrah to say that this was my last year."

The Lynx made a splash in WNBA free agency on Wednesday, signing forward and five-time All-Star Angel McCoughtry. She was the No. 1 overall pick in 2009 and led the Atlanta Dream to three WNBA Finals appearances in four years.

"Everybody knows that Angel McCoughtry’s passion, competitive drive, her position to be able to help us compete for a championship, that might have been a part of the free agency pitch," Reeve said.