Grammy Award-winning performer John Legend made a pit stop to the team's locker room after the Saturday night game... (Video from University of Minnesota Football)

FRESNO, Cali. (FOX 9) - After the Golden Gophers squeaked out a win in overtime over the Fresno State Bulldogs in California, the team got congratulated by a celebrity.

Grammy Award-winning performer John Legend made a pit stop to the team's locker room after the Saturday night game wrapped up late on the west coast. Along with being an acclaimed performer, Legend is also the uncle of Gophers wide receiver Michael Brown-Stephens. 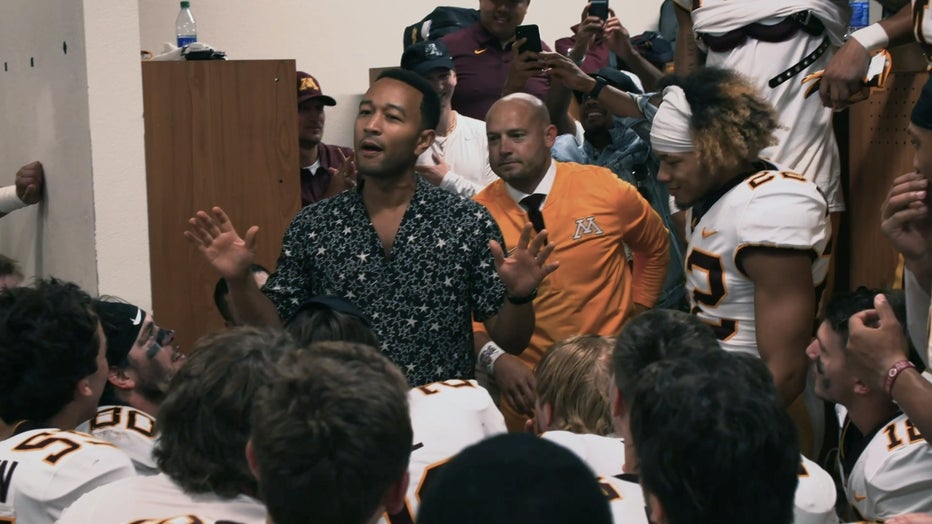 After the overtime win, John Legend gave the team a victory speech congratulating them. (University of Minnesota Football / Supplied)

"I'm proud of my nephew, but I'm proud of all y'all," Legend told players. "That was an incredible win. Congratulations, y'all."

"I've never said this before in my life, but row the boat!" he added.

Team members responded to Legend's presence by lifting him up for a lockerroom crowd surf. Gophers head coach PJ Fleck added on to Legend's visit by giving him one of the team's game balls.

Again, the Gophers topped the Bulldogs, 38-35, in overtime. The Gophers scored a late touchdown to tie up the game at 28-28 in the fourth quarter. In OT, after each team scored a touchdown, the Gophers knocked in a 37-yard field goal to go ahead -- with an interception sealing the victory.