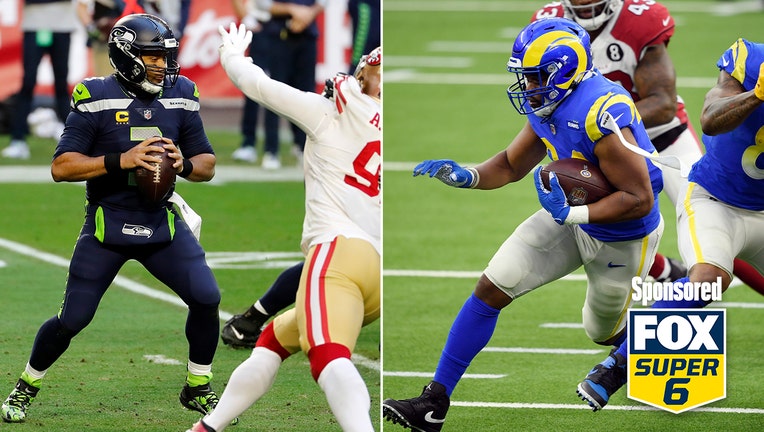 LEFT: Quarterback Russell Wilson #3 of the Seattle Seahawks throws a pass during the second half against the San Francisco 49ers at State Farm Stadium on January 03, 2021 in Glendale, Arizona. (Photo by Chris Coduto/Getty Images) RIGHT: Malcolm Brown

The playoffs are a time of excitement. They are also a time of mystery.

Who is going to win the ultimate prize? Who will be the standout stars to etch their names forever?

And now: how much can you win with a mystery prize in FOX’s Super 6 jackpot.

And being able to predict the big events of this game could help you win the mystery prize in FOX’s Super 6 contest.  Just download the free app, answer six questions correctly and you could win up the prize- which will be announced during the NFL on FOX pre-game show Saturday.

Could anything really be better than that? Here’s the questions and how to look at it

One of the biggest questions heading into this game will be Goff’s hand, which was broken during the second matchup against the Seahawks two weeks ago. That could impact Sean McVay’s game plan and the amount of passing plays that the Rams will call. Still, these are two games who are able to use the passing game at times as effectively as a running game- throwing swing passes and short tosses to the running backs and wide receivers. That could bump the total up a little bit.

The Rams have a big key player coming back with Cooper Kupp returning from a stint on the COVID-19 list. Kupp gives Goff a possession receiver and allows the Rams to play more of a checkdown game which could bump the total receptions for Los Angeles up. However, DK Metcalf and Tyler Lockett are capable of big games. This is a tough call.

Cam Akers has been a full participant in practice this week – a big factor in this game when you consider that the Rams leading rusher for the season missed the second game against Seattle two weeks ago. Seattle’s leading rusher is Chris Carson, who has a 94 yard rushing average in four games against the Rams in his career.

Again, a lot of this could end up being depended on Goff’s hand. Still, Wilson has an ability to put up some major passing numbers. The frequency of those has diminished in the second half of the season, but Wilson is also a prime-time guy who has traditionally played his best football in the biggest spots.

Nsimba Webster is the Rams primary punt returner with 25 of them for 185 yards and a long of 34 yards. (Kupp has returned nine for 50 yards.) D.J. Reed has been the kick returner for the Seahawks in the last four games with eight returns and 59 yards with a 12 yard long.

Choose a team to win and by how many points

The Rams defense is the best unit on the field for both teams. However, the issue for Los Angeles is Goff’s health and his ability to play an acceptable level of quarterback. That had been in question before the injury when the former No. 1 pick in the draft was a turnover machine. Seattle is the hedge pick, but it isn’t a comfortable one by any means.