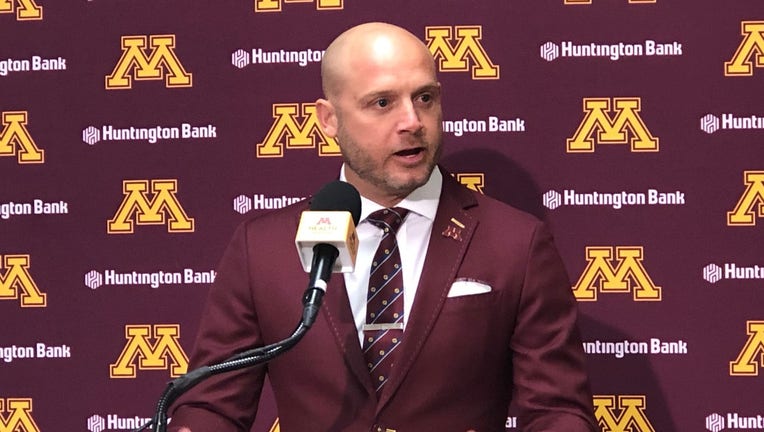 Gophers coach PJ Fleck talked Tuesday about how his program can build off a 9-4 season in 2021 as spring practice is underway.

MINNEAPOLIS - The University of Minnesota football team started Spring Practice on Tuesday, but before the Gophers hit the field, PJ Fleck took the time to recognize a successful winter season for other sports on campus.

The Gophers’ men’s hockey team is in the Frozen Four. Gable Steveson won an NCAA wrestling title at heavyweight. Minneapolis hosting the Women’s Final Four this weekend, Sarah Bacon won a national title in diving for the Gophers, Max McHugh won a national title in swimming and Taylor Heise was named the "Heisman of Hockey," winning the Patty Kazmaier Award.

On the football field, Fleck had some promising news to deliver as well. Mo Ibrahim and Trey Potts are both with the team and working out as spring practice starts. Ibrahim is practicing with the team this week, though not doing any contact work, and will work out on his own starting Friday, when he observes Ramadan. The religious holiday is observed by Muslims all over the world, and requires fasting from sun-up to sun-down.

Ibrahim was carving up the Ohio State defense for 164 yards and two touchdowns before going down with a season-ending leg injury. He won’t do any contact until the fall.

Potts had 112 carries for 575 yards and six touchdowns before going down with a season-ending injury at Purdue that required him to be hospitalized for a week. He’s been back with the team working out all winter, and will do some group and individual activity during spring practice.

The hope is both will be ready by early September to compliment top returning rusher Mar’Keise Irving, after Ky Thomas transferred.

FLECK NOT CONCERNED ABOUT DEPTH AT LINE OF SCRIMMAGE

Fleck has plenty of holes to fill on the offensive and defensive lines for the 2022 season. John Michael Schmitz is back, but gone are Daniel Faalele, Conner Olson, Blaise Andries and Sam Schlueter. Fleck went to the transfer portal to get Quinn Carroll and Chuck Filiaga, and has starting experience returning in Aeriontae Ersery and Nathan Boe. Fleck also mentioned Tyler Cooper and Karter Shaw as impact players.

On the defensive line, Trill Carter and Thomas Rush are back. But Boye Mafe, Nyles Pinckney, Micah Dew-Treadway, MJ Anderson and Rashad Cheney are gone. Fleck went to the transfer portal to get Darnell Jefferies of Clemson and Lorenza Surgers of Vanderbilt.

"That’s why we brought them here. We brought them here to plug them right in," Fleck said. "Any time we take anybody out of the portal, we want to make sure that we’re taking them with a mindset and a thought that we’re going to play them. These guys have played a ton of football or at least for us have been around a while. They’ve just waited their turn and here it is. We’re going to have 10 guys, hopefully come the season, that have either started big-time games or played in big-time games. I know everybody is worried about the O-line and D-line, but if you saw what I saw since January, you wouldn’t be as worried about it."

One big priority for Fleck entering the 2022 season that starts in spring practice? A more dynamic and consistent passing game.

Tanner Morgan, who is back for his sixth season, set several passing records in 2019 with 30 touchdowns and just seven interceptions on the way to an 11-2 record. The last two seasons, 17 touchdowns and 14 interceptions, and 12 wins. Morgan dealt with COVID-19 impacting the program, and his father’s death from a brain tumor.

He also had stretches without Chris Autman-Bell, Dylan Wright and Daniel Jackson last due to injuries. Kirk Ciarrocca, his offensive coordinator in 2019, is also back.

"I think we have a really good offense in terms of skill players and people across the board. This is the time to be able to mold the into what we are going to be able to become. Kirk is back and everybody knew who Kirk was. I think he’s had to be able to work at that," Fleck said. "There were four wide outs that only played in about six or seven games, it was incredibly inconsistent. That’s what’s fun about a new year, these guys have worked really hard. January through March, I don’t think we’ve had a better offseason."

The Gophers will have 15 Spring practices, with workouts on April 5 and April 16 open to the public before the April 30 Spring Game at Huntington Bank Stadium.