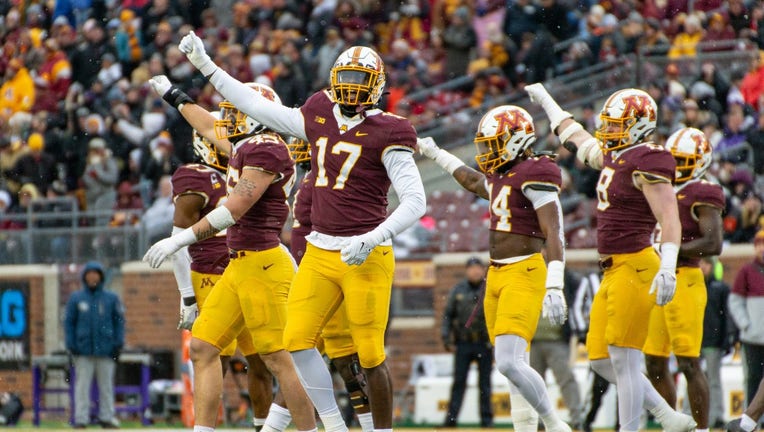 MINNEAPOLIS - PJ Fleck had many one-liners at his introductory news conference in 2017 as the new University of Minnesota football coach.

One of them: "I eat difficult conversations for breakfast." He’ll be having several of those this week, whether he likes it or not, as the Gophers host Iowa on Saturday in the annual battle for Floyd of Rosedale. It’s Minnesota’s final home game, Senior Day for as many as 25 players. Due to the COVID-19 pandemic year in 2020, many of them can come back for 2023 if they so choose.

Fleck will be finding out this week some of those answers as players come by his office.

"Senior Day is one of the most emotional times, emotional minutes before a game that you have. There’s so many people who have done so much for this program," Fleck said Monday. "I can’t thank them enough. We’d love to have a lot of them back, I still have to have some conversations. I’m interested in who shows up today and asks about Senior Day and who wants to walk. We’ll find out. Some I’m still holding out."

One that will be back is wide receiver Chris Autman-Bell, who is seeking and will likely get a medical redshirt after a season-ending leg injury against Colorado. Two that are playing their final home game Saturday: Tanner Morgan and Mo Ibrahim.

Morgan, who has missed two-plus games with an upper body injury, is in his sixth and final year of eligibility and will leave Minnesota as the program’s all-time winningest quarterback. Ibrahim has set all kinds of running back records, and will leave as one of the top rushers Gophers’ history. Most of the current seniors and graduate students have been with Fleck since he left Western Michigan for Minnesota, have won three bowl games under Fleck and have had chances to contend for the Big Ten West, this year included.

"I can’t tell you how much they mean to this program. I told them the great thing about it is you’ve created enormous expectations here and aspirations within the program. You’ve done things that teams haven’t done in over 100 years," Fleck said. "I think they’ve changed some of the thoughts, beliefs of what Gopher football can become and what we can get it to."

There is one rather dark cloud hanging over the program – Fleck is 0-5 against Kirk Ferentz and Iowa. Five straight years, the Gophers have watched the Hawkeyes parade around with Floyd of Rosedale. The rivalry game was their first loss after a 9-0 start in 2019, and aspirations of getting to the College Football Playoff.

Last year, they had all kinds of chances despite a 27-22 loss at Kinnick Stadium. This year, the Hawkeyes come to Huntington Bank Stadium and beat Wisconsin last week despite collecting just 146 total yards. It’s a rivalry game, one that’s circled on the schedule every year. It’s the one Fleck has yet to win.

"Our players know how important this game is, that’s a rivalry, that’s what it’s all about. This is why you come to the University of Minnesota, to play in games like this," Fleck said. "I don’t think we need to tell them how important that is."

A win would also get them potentially one step closer to a Big Ten West title, which was an afterthought following a 45-17 loss at Penn State last month. Minnesota needs to close out the regular season with wins over Iowa and Wisconsin, and have Illinois and Purdue lose one more each. Illinois faces Michigan and Northwestern, and Purdue has Northwestern and Indiana.