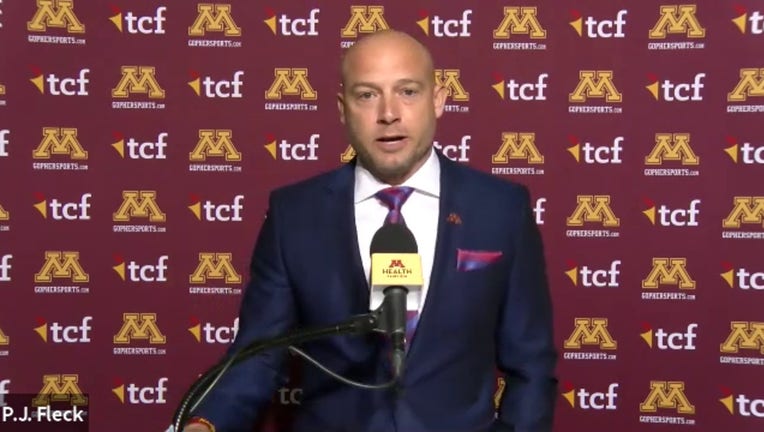 Gophers coach P.J. Fleck talked Thursday about the start of the spring football season for the University of Minnesota, coming off a 3-4 season impacted by COVID-19.

But P.J. Fleck didn’t feel like waiting that long. So surprise, the Gophers held their first 12-period session of the spring on Thursday. They’ll do another one on Friday before things get more real next week. Fleck has never been short on optimism, and he thinks the Gophers are on the verge of a breakout 2021 season.

Minnesota has all but two starters back, with Rashod Bateman and Benjamin St.-Juste headed to the NFL Draft, from a team that battled adversity throughout a 3-4 season in 2020.

"We’re already creating that internal expectation and that internal pressure, because I really like this football team. I felt like we did 2020 well," Fleck said Thursday. "Out of all the things we went through, nobody just picked up and left."

On the surface, 3-4 doesn’t meet expectations. But the Gophers had two games canceled due to a COVID-19 outbreak within the team, and despite missing 33 players, got a win at Nebraska. The team battled struggles with injuries, mental health issues associated with COVID-19 and did its best to address social justice issues in the wake of George Floyd’s death in Minneapolis on Memorial Day.

The Gophers created a HERE campaign, Helping End Racism with Education, to create a positive platform to do their part to create change.

Their motto for spring football and for the 2021 season? "TGIF." No, not Thank God It’s Friday. It stands for Togetherness, Gratitude, Identity and Focus. Fleck wants the Gophers to do everything together, he wants them to be grateful for every day they have, they’ll form an identity and every day will have focus.

"We have to get better together and if I could wave a magic wand, it would be everyone coming together. If we can do that, I think this team is going to be very talented. We’re going to be a very good football team," Fleck said. "I really enjoy being around this football team, and I really enjoyed watching this players go through and get through and overcome what they all went through. They went from boys to men."

If we can expect anything out of Gophers’ spring practice, expect competition. The Gophers return the entire offensive line and nearly everybody except Bateman on offense. Tanner Morgan is in his third year as a starter, but will be pushed by Zack Annexstad, Cole Kramer and Jacob Clark. Mo Ibrahim also is back after leading the Big Ten in rushing last season, and being named the Big Ten Running Back of the Year.

The defense has several regulars back, after many young players took their lumps in 2020, and adds Clemson transfer Nyles Pinckney.

Fleck said there will be competition at every position, and that’s exactly what he wants.

"No job will be won in the spring, I will say that. We have a competition that we haven’t had in years at every position. Everybody is going to compete. This is going to me the most competitive spring we’ve ever had," Fleck said.